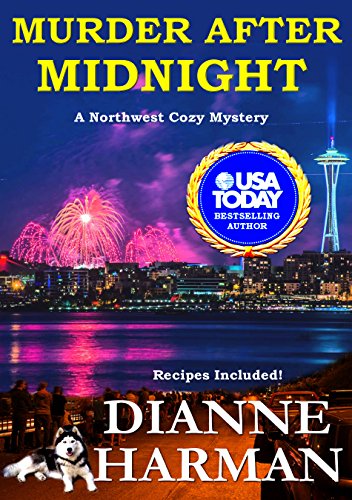 DeeDee's New Year looks pretty bleak after a prominent television hostess is murdered at her New Year's Eve party and is now after DeeDee.

Ever heard of someone celebrating New Year's Eve by committing murder? Well, it happened, and the killer is now looking for DeeDee!

That's the situation DeeDee found herself in after the very successful New Year's Eve party she catered for Dana Donnelly, the popular hostess of the Seattle television entertainment show, New Day NW. The successful party quickly became a distant memory when Dana was found murdered near her pool house. It didn't help that the murderer was certain they'd been spotted by DeeDee, and she could identify the killer.

DeeDee had ended her relationship with, Jake, her PI boyfriend, so she had no one to turn to for help when the killer sent her a threatening note telling her to keep quiet or she'd be the next victim. Her sister, Roz, calls on Al De Duca to help. He's a retired enforcer for the mob who's afraid of spiders and the open ocean, but has a heart of gold. Can he make it back from the Cayman Islands in time to prevent DeeDee's murder?

But just who was Dana's murderer? Dana's spurned billionaire shipping magnate and longtime lover? His jealous wife? Dana's husband who has a serious gambling addiction? Her television substitute who desperately wants her job? Or the television star she outed when she disclosed his sordid past on her show?

It becomes a race against time to see if Al, her Mafia bodyguard, can find the murderer before DeeDee becomes the next victim. Fortunately, her estranged boyfriend, Jake, and her loyal husky, Balto, are there to help Al, but will it be enough?