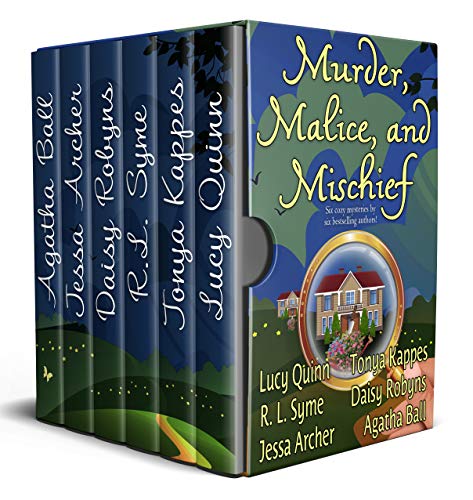 By: Lucy Quinn & Others

Enjoy this box set containing six whodunit stories full of humor and mystery from six authors who have a clue. The set contains the following first-in-series stories: Stamped Out, Peril in Pensacola, A Murder at the Country Club, Vangie Vale & the Murdered Macaron, The Secret of Seaside, and Who Shot the Serif.

Enjoy this box set containing 6 Whodunit stories full of humor and mystery from 5 USA Today and bestselling authors who have a clue. The set contains the following stories:

Who Shot the Serif? - Daisy Robyns
When hand letterer Jamie Lang's nemesis turns up dead, Jamie becomes the main suspect. She's prepared to go out with a flourish if that's what it takes to catch the real murderer. She's desperate to save her hand lettering business, but will her quest lead her right into a killer's snare?

The Secret of Seaside - Agatha Ball
Welcome to Seaside! A sleepy island village filled with sweet summer romance, colorful characters... and MURDER. When the town's founder washes up on the beach and her new flame is wrongly accused, aspiring baker Paige Comber must figure out whodunnit.

Vangie Vale & the Murdered Macaron - R.L. Syme
In a quaint mountain village, with its alpine architecture and sleepy, snowy streets, Vangie Vale thinks that starting a bakery will be a nice, quiet life. Making macarons and baking bundt cakes seems harmless, right? But when a movie star comes to town and his mysterious local connections tag Vangie's curiosity... what else can a girl do but get involved?

A Murder at the Country Club (A Canterbury Golf Club Mystery) -- Jessa Archer
On the night of the Canterbury Golf Club's First Annual Glow-ball Golf Tournament, Lady Captain Beatrice Yates argues with Ruddy Agani in front of all the members and invited guests because Ruddy can't get along with anyone. When he is found murdered on the golf club's seventeenth hole soon after, Beatrice becomes the prime suspect.

Stamped Out -- Tonya Kappes
Mail Carrier Bernadette Butler knows her customers better than their inner circle. From family secrets to hush hobbies and when one of Bernadette's customers shows up dead, a neighbor is the prime suspect. Bernadette knows that's not the killer...but other customers on her mail route have motive and she's putting her sleuthing skills to rip those southern secrets out from under the rug.

Peril in Pensacola - Lucy Quinn
Dora Winslow is having a tough day. Not only does she stumble upon a money laundering scheme, but the next thing she knows her boss is dead and she's the prime suspect. Fortunately, her best friend Evie is in her corner. With help from a hot chef, a friendly mailman, and a little white dog, Dora and Evie must balance the scales to save their bottom line.