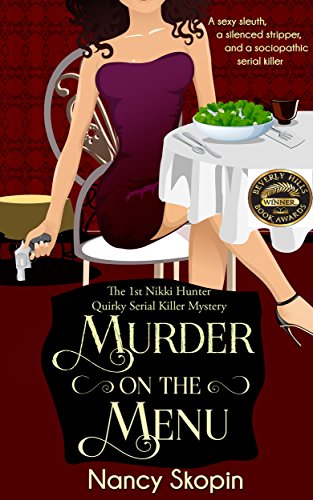 Murder On The Menu

A sexy sleuth, a silenced stripper, and a sociopathic serial killer …

Private Investigator Nicoli "Nikki" Hunter has lost enthusiasm for the bar and restaurant surveys that pay the bills but no longer challenge her. When the brutal murder of socialite, (and stripper), Laura Howard lands on her desk, she finally encounters a case worthy of her talent.

Murder on the Menu is the first in a series of mysteries featuring Nikki Hunter. The only child of a Cossack and a former nun, Hunter is a smart, tenacious thirty-five-year-old, who lives aboard a sailboat in the San Francisco Bay Area and works out of a ground floor office in the marina complex where she lives.

When the Howard murder goes unsolved, the victim's mother contacts Nikki, who agrees to a preliminary investigation, and discovers that Laura was about to inherit several million dollars. The list of suspects grows as Nikki delves into Laura's past. Nikki befriends Homicide Detective Bill Anderson, and he confides to her that three recent murders, including Laura's, have peculiar similarities.

Nikki enlists the aid of her best friend and fellow boat-dweller, Elizabeth Gaultier, and while the two are conducting interviews they discover they're being tailed by another PI. When the interviewees start turning up dead, Nikki tells Detective Anderson everything she's uncovered, but it's too late. Nikki has already become the killer's next target.