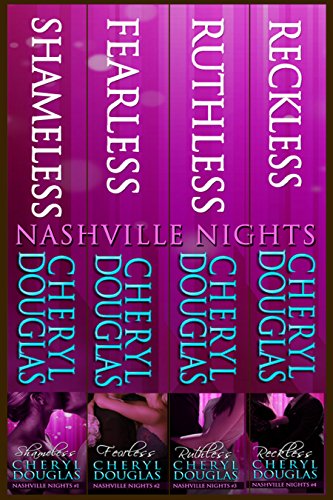 Music City is the backdrop for stories that include: unrequited love, secrets, deception, and reconciliations. This unique group of family and friends that will leave romance readers feeling they not only know, but love these characters.

Shameless- Trey Turner may be topping the country music charts, but his life has been going downhill since his wife left him five years ago. He's desperate to make amends for the mistakes he's made and convince Sierra their love deserves a second chance.

Sierra Brooks is happy for the first time since her divorce. She has a career she loves, and a man who loves her. Unfortunately, the man she intends to marry isn't the only one professing his love for her. He may be able to offer her safety and security, but will she decide to risk everything for another chance with the man who broke her heart?

Fearless- Lexi Brooks overcame adversity to build a successful real estate business that allows her to live life on her terms. She envisions travel, fun, and excitement, not marriage, kids, and commitment. But will Trey's sexy bodyguard, Josh, throw a wrench into her plans?

Being a cop has taught Josh Cooper to take calculated risks, but he's tired of living with the daily threat of danger. He's ready to settle down with someone who wants to be a step-mother to his two teenage sons. Too bad Lexi isn't that woman. She's sexy, smart, head-strong, and they're totally in sync in the bedroom, but she isn't willing to settle into a life of domestic bliss. Or is she?

Ruthless- Marisa Turner has wanted her brother's best friend, Luc, forever. But she also wants a baby and it seems Luc isn't up to the challenge. She has to choose between the man she loves and the family she hopes to have. Fortunately, there's another man waiting in the wings to make her baby fantasy a reality.

Luc Spencer is tired of hearing about marriage and babies. He loves Marisa, but he can't promise her forever. After two years together, she tells him it's over. He's not worried, he believes she'll be back. But what will happen when he finds out there's another man ready and willing to give Marisa everything he can't?

Reckless - As a publicist, Avery Collins knows that mixing business with pleasure is a recipe for disaster so she has one rule. Her bedroom is off limits to clients, no matter how enticing and persistent they may be.

Ty McCall is country music's newest rising star, but he needs the best team in the business to help him make it to the top. That team includes Avery, who gave him the most unforgettable night of his life only to disappear the next morning.

Avery agrees to work with him, but Ty isn't willing to settle for a professional relationship with the woman of his dreams. Can this sexy cowboy convince her that rules were made to be broken?