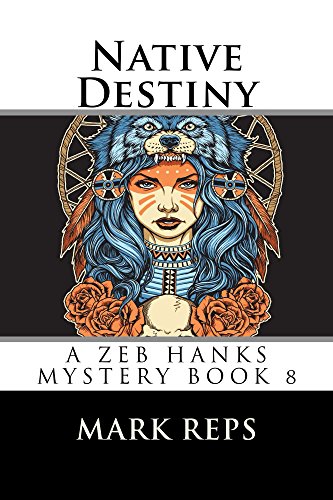 Zeb and his newest Deputy set out to answer the desperate call of an ancient Apache wise woman. The intriguing tale involves a 100-year-old grudge, Native American legend, greed, lust and love. Fans of Longmire will enjoy getting to know Zeb, a man who strives for justice but doesn't always play by the rules

Sheriff Zeb Hanks gets a dire warning regarding his own life and that of Deputy Jake Dablo from Olga Mae Hooper Feathers. Olga Mae is an elderly sheep and goat herder in the Galiuro Mountains of Graham County. She is at the core of long-standing Native American mysticism as well as having a personal history that is intertwined with Zeb's family. Olga Mae carries many secrets of the past.

Certain evil men are intent on getting Olga Mae to share those secrets. They are looking for a legendary gold stash for their own gain and will stop at nothing to get their hands on it. Others want to protect not only the gold, but the history of the Indian nation. They become obstacles for the men with gold fever. A high price is paid when the two collide.

This is a tale woven with the threads of family, deceit, desire and the lust for gold. Zeb is deftly aided by his new deputy, Clarissa Kerkhoff, who has deep family ties to the area. She grew up on a ranch near where the crime occurs. Deputy Kerkhoff’s ten-year military career as an MP makes her Zeb’s most able compatriot in solving the crime.

The mystery includes the usual cast of characters, including the highly competent but ever eavesdropping Helen Nazelrod, the somewhat disgruntled Deputy Sawyer Black Bear, the ever present and always sturdy Deputy Jake Dablo and the extremely competent computer expert Shelly Hamlin.

The intriguing tale of past, present and future involves a 100-year-old revenge and is replete with Native American legend, Indian lore, devious bad guys and people with the best of intentions.

Saddle up and enjoy the fast ride in this tale of lust, greed, history, revenge and love. Zeb is back, but what he doesn't know, could kill him.