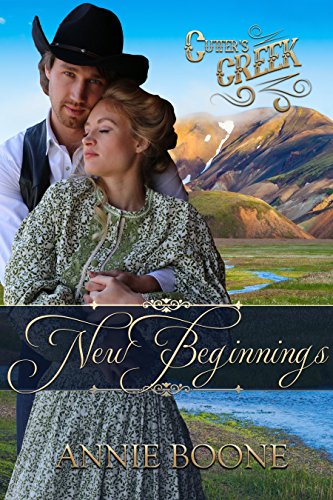 Audrey is a widow who needs to take care of her daughter but her money is almost gone. Caleb is an angry widower who needs help with his daughter. A marriage of convenience seems like a good idea. Everything goes according to plan until one of them falls in love.

Audrey Norris is worried but determined. Her life has taken a drastic turn. A short year ago, she was a happily married woman with a young daughter and a warm, cozy home. Now she's a widow responsible for her daughter, her mother, and a big fat mortgage she didn't even know about. She can't pay the house note and she doesn't have a job. Her options are few and mostly undesirable.

Widower Caleb Jefferson is the successful blacksmith in the town of Cutter's Creek, Montana. His sister has been fussing after him to get married again, but he's managed to dodge her arguments. Until now. He finally sees that his daughter needs a mother. However, he'd been in love before and that ended in disaster and heartbreak. He has no desire to fall in love again, so he's hoping he can find a woman who will agree to his terms.

When Audrey and Caleb end up together, everyone around them is delighted that their families are joining. Caleb tries to make it work, but he can't seem to let go and move on with his life.

Audrey worries about their strained relationship. She prays every day for help and guidance. She hopes that soon a breakthrough will come. God is taking His time. In the meantime, the family grows closer while Caleb drifts further away.

One simple misunderstanding will sever the fragile balance they've created. Will this be the end of their relationship or the beginning of a lifetime of love?