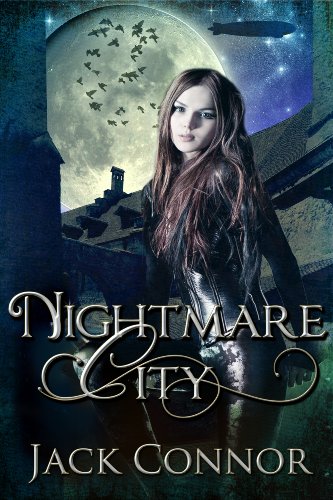 When beautiful young thief Katya goes on the run in the strange and mysterious dystopian city of Lavorgna, she gets mixed up in events that are rapidly spiraling out of control. An otherworldly horror is terrorizing the city, and only Katya can stop it.

When beautiful young thief Katya goes on the run from a loan shark in the terrifying dystopian / steampunk city of Lavorgna, the last thing she expects is to be plunged into an epic adventure that will determine the fate of the world, but that's just what happens in "Nightmare City: a Steampunk Dystopian Adventure" by bestselling author Jack Conner.Lavorgna is a city of fog and shadows, undead servants and soaring zeppelins, where mad scientists prowl the alleys, mob bosses strive for power and the dreaded Guild of Alchemists holds the land in an iron grip, while beneath the city lies a network of black caverns embedded with the ruins of an ancient race. Known as the Elders, they long ago worshipped Lovecraftian horrors.

To survive and save the dystopian world from an unimaginable fate, Katya must navigate all these dangers and more. On the run, she seeks out the local mob boss Ravic, only to learn that he's embroiled in a vicious gang war with his rival Loqrin Mars, a conflict that has supernatural overtones. A new horror has gripped the city, with mysterious creatures called haunts killing people by the dozen, and Ravic believes Loqrin Mars is behind it. If Katya wants Ravic's help, she must find out what Loqrin is up to -- and stop him.

To do this, Katya must use all her thieving skills and cunning, because if she doesn't succeed, the whole world will suffer an awful fate.