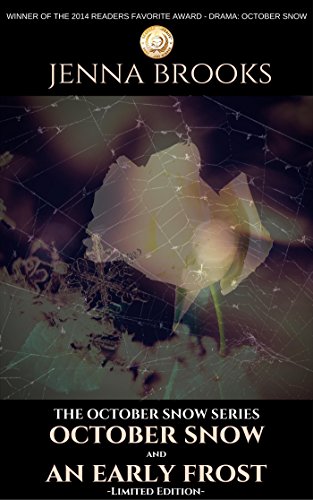 October Snow: A jaded master manipulator squares off with her best friend's stalker - and it's the mind game from hell.
An Early Frost: Six innocent people are caught in the crossfire of a custody battle... That turns deadly.

You know that saying, "You abuse, you lose"?
This series gives it a whole new meaning.

Josie Kane is a "difficult" woman, a pure enigma - one who survives her abusive husband by honing her unnerving talent for playing mind games: She knows exactly how to manipulate a bully.

Finally divorced, she thinks the abuse is over, and she's free. She's wrong. And her cynicism is building.

Josie works with battered women, trying to rescue them from a fate similar to hers. But on the night that yet another battered woman is murdered by an abuser, crying for a hero as she dies in Josie's arms, her cynicism becomes a quiet, simmering hatred.

Her one remaining refuge is in her bond with Maxine and Samantha, the two friends that she loves like sisters. When Samantha becomes pregnant by Jack - an abuser who makes known his intention to use the baby as a weapon of control - Josie's hatred ripens to a vengeful fury. She sets out to take on one more batterer, manipulate one more bully... And she lures Jack into the crosshairs of the ultimate mind game.

Her friends are convinced that she intends to rid Samantha of Jack. They're right.

But with Josie Kane, as always, there's a twist.

With her friends helpless to stop her - and with Samantha hanging in the balance - Josie squares off with Jack in a twisted battle of wits to determine which side will win Sammy's future.

And this time, there will be a hero.

They say that love doesn't hurt.
Sure it does. It hurts like hell.
Will Remmond is finding that out.

An eminent Family Law attorney, Will Remmond is fed up, burned out, and ready to walk away from fighting the insanity of the court system.

But there are two abused children left to rescue. One of them is five-year-old Alexa Reynolds. She and her mother are being stalked by a sociopath.

Her mom calls the guy "demonic."
Alexa calls him "Daddy."
And Alexa's daddy calls Will a "walking dead man."

The other abused child lives inside of Maxine Allen, the woman who Will waited decades to find. Max is becoming withdrawn, striking out at him - and he knows only that it has something to do with her father. Unable to learn the secrets from her childhood, he's watching as the woman he loves descends into her own private hell.

Between saving Alexa from her murderous father and Maxine from her demons, Will is walking into the fight of his life. One that he intends to win.