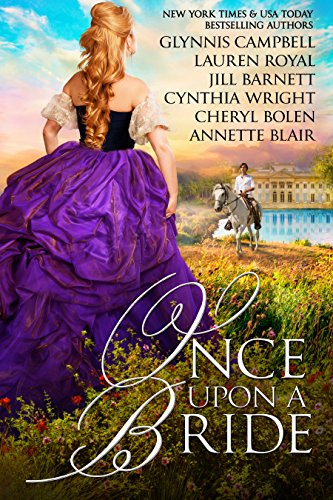 Once Upon A Bride

By: Glynnis Campbell & Others

Fall in love with six grooms-to-be as you escape to medieval Scotland, 17th century England, 19th century America, Georgian London and the high seas.
-THE HANDFASTING
-FOREVERMORE
-FALL FROM GRACE
-HEART OF FRAGILE STARS
-THE FOUR-LEAF CLOVER
-A WINTER HEART

THE HANDFASTING by Glynnis Campbell
The Highlands, Scotland, 1199: When Sir Noel de Ware claims his betrothed—the most beautiful heiress in the Highlands—he's sure he's getting the best gift ever…until he discovers he's wedded and bedded the wrong sister. Spirited Ysenda of Rivenloch never intended to be a counterfeit bride, and when she falls in love with her handsome husband, she becomes trapped in her own deception.

FOREVERMORE by Lauren Royal
England, 1667: Sensible Clarice Bradford is content in her widowhood. She has a pretty one-room cottage and a lovely little daughter, and the last thing she wants is another husband. Until one fairytale evening when she's invited to a wedding at a castle…

FALL FROM GRACE by Jill Barnett
Scottish Highlands, 17th Century: The Clan McNish is left starving by their bitter rivals, the McNabs. Granddaughter to the chieftain, Grace McNish, decides it's her duty to capture and ransom a vile McNab. But she and her clan of misfits capture the wrong man, Colin Campbell, Earl of Argyll and Lord of the Isles, who holds her clan's fate in his powerful hands.

HEART OF FRAGILE STARS by Cynthia Wright
Georgian London and the High Seas: Dashing French pirate Jean-Philippe Beauvisage revels in his life of freedom…until the night at a ball in Georgian London, when a Russian beauty steals his heart. The instant attraction he feels for recently-orphaned Antonia is soul-deep, but she is bound for America with an arrogant captain.

THE FOUR-LEAF CLOVER by Cheryl Bolen
Missouri, 1870: The wealthiest man in Peace, Missouri, Norman Sterling can't believe his good fortune when the beauty he worshiped from afar years ago moves to his town. At their Fourth of July picnic, he blurts out a proposal to Millie Gresham—and to his profound surprise, she accepts. But can she ever win his love?

A WINTER HEART by Annette Blair
Ohio, 1873: Hannah Peachy has nurtured a winter heart since she lost her family. Caleb Skylar struggles with the horror of his wife's drowning. When Caleb aimlessly pulls up stakes and leaves his home behind, the spirit of Hannah's earthbound twin leads him straight to Hannah. But how can two guilty souls accept love as a reward for their transgressions? A Sensual Amish Historical Romance.