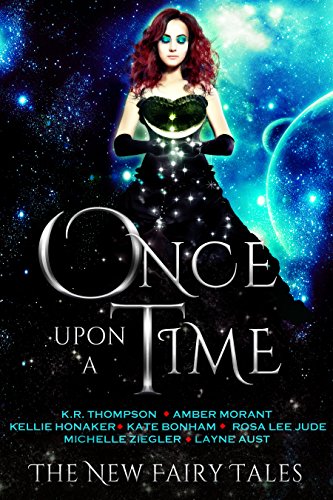 Once Upon A Time: The New Fairy Tales

Seven magical stories based on the original tales you thought you knew...
In this cross-genre collection, you will discover retellings that will reminisce of your childhood, and those that will explore the darker side of the brothers Grimm. Traditional, modern, fantasy, and horror abound in this diverse group of stories sure to please those who love fairytales with a twist!

Seven magical stories based on the original tales you thought you knew...
In this cross-genre collection, you will discover retellings that will reminisce of your childhood, and those that will explore the darker side of the brothers Grimm. Traditional, modern, fantasy, and horror abound in this diverse group of stories sure to please those who love fairytales with a twist!

Finding Bell - Michelle Ziegler
Annabella can't remember anything before the last six years, and her dreams are telling her something. She just doesn't know what. Desperate to find the missing pieces in her life, she heads to France, where a castle exists that matches the one in her dreams. Once there, she has to figure out if the mysterious place holds the key to unlocking the past she can't remember.

Henri, once a powerful Fae prince, is locked within the home he built for a princess who can't remember him. A rose blooms every hundred years, signifying the chance to break the curse placed on him and his Faerie Court. Something is changing, and the girl he loves has returned—but can he get her to love him again and free them all from the endless cycle?

The Blue Mage - Amber Morant
Elona is one of the luckiest thieves in Tore. However, her eye is now on the treasures hidden within the Citadel of Hours where the Blue Mage resides. Becoming an apprentice is easy, but learning who he truly is becomes a nightmare in itself.

Dragon Kept - K.R. Thompson
Fairy spells are going awry—and for no good reason. Even though Morgana has managed to patch up her own botched spell and turn the toad back into a prince, she's been given the task of fixing another fairy's mistake as her punishment. But it won't be easy. With an entire kingdom turned to stone, a princess forever charmed in sleep, and one unhappy dragon keeping guard—things could get interesting, to say the least.

If the Shoe Fits - Rosa Lee Jude
There's more to Cinderella's story than glass slippers and pumpkins. Waking up in a different time, a modern world, Cinder discovers that her storybook life was no fairytale. Is she brave enough to travel back in time and face the evil that threatens her future? This twist on a classic will leave you wondering if other fairytales are really fiction.

From the Depths - Kate Bonham
Carys, the favorite daughter of the King of Atlantia, has always wanted something greater for herself than to marry young and have more mer-children. She wants to be human—to marry the young sailor she's seen by the docks. When she's given the opportunity to become human, she jumps at it, hoping to meet her dream man.

Only problem is—humans are not what she has thought all her life. They are greedy, money-hungry monsters. What if the man she's secretly hoping for, is the one she was destined to marry? What if it's not always greener on the other side?

Godmother Death - Kellie Honaker
Philip was just an infant when Death became his godmother. As a gift, she presents him with a barrel of cider that bestows miracles to those who drink from it.

But there is a catch—it only works for certain people. When the barrel refuses to work for the only woman he's ever loved, Philip must deal with the consequences of cheating Death.

The Steel Heart - Layne Aust
Emilio has been driven to madness since the death of his love, Natalia. Stuck in his shop, the heartbroken man tries to recreate the beauty with steel and nails. But the blacksmith is awarded a second chance by a wayward witch who makes him a deal—one that could either reunite the lovers or keep them apart forever.