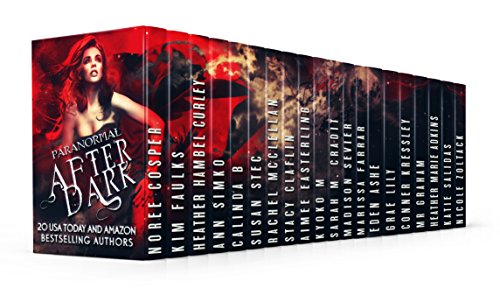 By: Rebecca Hamilton & Others

Noree Cosper - A Dose of Brimstone
Gabby and the Van Helsing family must stop a drug that enable demons to possess humans from spreading across New York or it will be Hell on Earth.

Kim Faulks - End of Dreams
A young pregnant woman and a hard-bitten detective are trapped in the middle of a paranormal war they never knew existed.

Heather Hambel Curley - Haunt
Death is not the end. Adelaide is used to battling souls, but when the Civil War begins, something evil wakes up. And this time, It wants her.

Ann Simko - Dark Crossings
Dying for the right reasons is better than living for the wrong ones.

Calinda B. Headspace: Seattle. 2052
When everything the activists and naysayers predicted comes true - global warming, planetary resources stripped, disease, pollution - the ravaged city of Seattle is left in chaos and disrepair.

Susan Stec - The Other F Word
Wandermere is not your typical fairy forest kingdom; think mouthy teen fairies in skinny jeans, texting on smart phones, driving bugs, and getting high on honey.

Rachel McClellan - Unleashed
Claire discovers a man close to her has ingested a stolen drug, unleashing his dark and evil alter-ego. Now he's determined to make her just like him. Like hell.

Aimee Easterling - The Complete Bloodling Serial
Wolfie Young is a bloodling, a rare shifter born in wolf rather than in human form. Can he ever find acceptance in a pack despite his differences?

Kyoko M - She Who Fights Monsters
Seer Jordan Amador and her husband the archangel Michael hunt down a serial killer with the help of their archenemy, the demon Belial.

Sarah M. Cradit - St. Charles at Dusk
Set amidst the lush and vibrant backdrop of New Orleans, this is the story of Oz and Adrienne. Of forbidden love, and startling heartbreak.

Madison Sevier - Wicked by Nature
When Selena realizes her life has been one big lie, she'll have to decide between saving her town and embracing her wicked destiny.

Marissa Farrar - Underlife
Thomas Young must head into the mile of abandoned tube tunnels and stations beneath London in a bid to save his son's life.

Eden Ashe - Dragon's Redemption
The one female he isn't supposed to want, is the only one he's ever needed.

Grae Lily - Milan's Return
He's haunted by his troubled past; she's desperate for a fresh start. When their worlds collide, everything will change.

Conner Kressley- The Breakers Code
Where were you when the world ended?

MR Graham - The Medium
Lenny is a vampire who can never kill, but even the most peaceful man has a breaking point.

Heather Marie Adkins - Wiccan Wars
Cade and Ever come from two worlds, but a common enemy forces their opposing covens to unite - and their love to ignite.

Katie Salidas - Carpe Noctem
Becoming a vampire is easy. Living with the condition is the hard part.

Nicole Zoltack - A Question of Faith
If Crystal can't control her magic abilities, she'll lose more than her faith, her boyfriend, and her mom. She just might start the apocalypse.