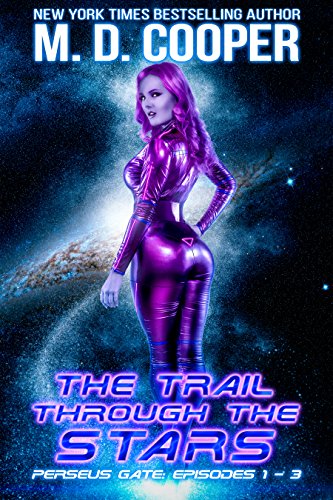 Perseus Gate Season: The Trail Through The Stars

After nine long years of searching the Inner Stars, Jessica and the crew of Sabrina have finally found the president's brother, Finaeus Tomlinson.
Now Finaeus has convinced them to take a shortcut through a jump gate--a new technology none of them have ever used before--located at a secret dwarf star mining operation.

The Gate at the Grey Wolf Star

After nine long years of searching the Inner Stars, Jessica and the crew of Sabrina have finally found the president's brother, Finaeus Tomlinson.

Now Finaeus has convinced them to take a shortcut through a jump gate--a new technology none of them have ever used before--located at a secret dwarf star mining operation.

But a mysterious group within the Transcend Space Force, known as the Grey Division, has orders to intercept and capture both Jessica and Finaeus.

Trapped at the bottom of a steep gravity well and surrounded by enemies, Jessica and the crew of Sabrina must find a way out of the Grey Wolf System and deliver the crucial information Finaeus carries back to New Canaan before even their allies are forced to turn against them..

The World at the Edge of Space

After near disaster trying to escape the Transcend at the Grey Wolf Star, Jessica and the crew of the Sabrina find themselves thousands of light years from their intended destination, deep in the Perseus Arm, at one of the furthest colonized worlds in the galaxy.

Sabrina has taken damage, Cheeky is in critical condition, and their supplies of antimatter and fusables are critically low.

The only system in sight? Controlled by the Orion Guard--their enemy.

It's going to take some quick thinking and smooth talking to get the ship repaired and figure out how they're going to travel clear across human space without being caught and destroyed by their now myriad enemies.

The Dance on the Moons of Serenity

Everyone deserves a day off, right?

That's just what Jessica and Cheeky are enjoying when a pair of old "friends" show up and force them to smuggle weapons into the Serenity System.

On their own with just a small interstellar pinnace at their disposal, Jessica and Cheeky aren't going to let someone else force them to smuggle weapons (especially when there's no profit in it for them) and they take control of their ship and escape.

Unfortunately, they still end up in the Serenity system...with the weapons. Now they must unravel a tangled web of deception in a highly stratified aristocratic society to learn the intended recipient of the weapons.

Attending a series of gala events, Jessica will have to use a particular set of skills she's acquired over the years (as a TBI Agent, seriously, people) to start a war between two aristocratic families.

What could go wrong?