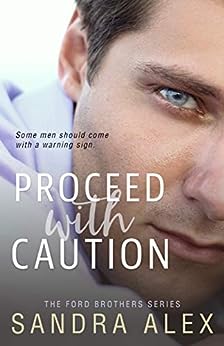 One lie that ruined a marriage. One lie that prevented another marriage from happening. Julia flees from her twisted fiancé, only to meet a man who seems as troubled as the one she left behind. Until Colton learns one thing about Julia that changes everything.

Colton all but wears a sign that says ‘No Women Allowed’ after his failed marriage to Pam. Pam promised him the world but never delivered. It’s no wonder when he meets the beautiful and intelligent Julia, he doesn’t let his heart pave the way. Colton’s love of his horse ranch, his students, his brothers and his money keep him happy. He doesn’t need or want anything else. When Julia walks into his life, Colton decides it’s best to proceed with caution, and the feeling is mutual.

John is sexy, successful and perfect fiancé material…when he’s not controlling, delusional and downright creepy. But how do you dump a guy your loyal and loving father fixes you up with, without breaking two hearts? When Julia goes MIA to her estranged sister’s place out of state, John goes ballistic. Especially when her sister works with dreamy-eyed Colton, and Julia finds herself spending a lot of time with them. But it’s difficult to keep someone safe when you don’t know they’re in danger.

Gun-shy, self-protective, and hiding from the truth, Julia is in no position to open her heart to anyone. Particularly when she has to look over her shoulder for her stalker fiancé every step of the way. Fearful and scarred, Julia doesn’t know what to do when her hormones wake up just at the sight of Colton. It seems no matter what door she opens, both the wolf and the sheep are there. When Julia’s past finally catches up to her, John demands her to do the one thing she can’t do…or die.

Her loyalty and all-consuming love were the reasons why I chose her…until she made me a promise she didn’t keep.

I thought I was done with women for good…until Julia came along.

Afghanistan changes a man in a way nothing else can, and the women flock to me like magnets because of it…but I don’t want any of them. The way they look at me, I’d like to tear their eyes out.

Julia doesn’t look at me like I’m a piece of meat. She also doesn’t see dollar signs when she finds out I’m a Ford boy.

Problem is, Julia doesn’t want anyone any more than I do. She’s running from something, but she won’t tell me what or whom….and then I find out the hard way.

Sure, running away is the cowardly thing to do. But if you were in my shoes, you might have done the same.

Colton is the type of guy to steer clear of, at least that's what my sister Liz says. He’s got this smouldering look that makes me lock eyes with him. But then we both look away. And it’s all good, because another man is the last thing I need…especially another man with major issues.

When Colton finds out what I’m running from, he teaches me a thing or two about men, and not in a way I would expect.

He’s full of surprises…especially that one kiss that leaves me breathless. It’s the last thing either of us wants…and the first thing we both need. He promised it would never happen again, but evidently his body and his heart are at a crossroads. I’m suffering from the same affliction.