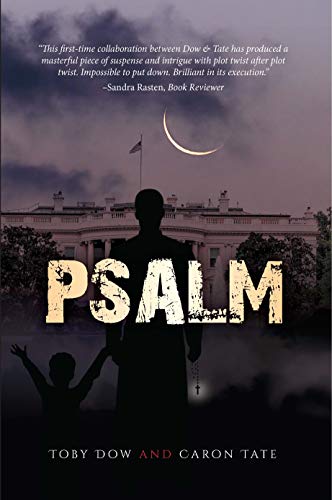 This elaborate and well researched edge of your seat thriller conceived by Toby Dow in his debut novel and masterfully woven by award winning author Caron Tate is the first ever collaboration by these two great minds.

Sneering at the decadence surrounding him in The City of Angels, the raging black storm outside reflects the mood of Michael Hitchings inside. He is preparing to execute the final stages of his masterful plan, vowing “There is nothing hidden that will not be revealed. There is nothing secret that will not come to light.”

Across town, FBI Special Agent Harrison Carter is determined to prove his worth, not only to him¬self and his superiors, but to his physician father whose impossible standards he feels he can never meet.

As a series of historically famous murders are duplicated with meticulous accuracy, US President Jameson Mitchell prepares to replicate former President John F. Kennedy’s fatal drive through Dallas. First Lady Pat Mitchell is strongly against the idea, but the President sees it as a symbolic reunification of his country.

As intelligent and as sharply focused as Agent Carter is, the killer he tracks continues taunting the FBI with his codes and riddles, always staying one step ahead. Worse still, the FBI begins to wonder if he is securing information from someone within the agency.

Only once the killer’s identity is discovered does Harrison realize the hatred Hitchings has for the church. What is his end game? Where is he leading them? Could his ultimate target be the President of the United States? Or is there an even more intricate and insidious secret yet to be revealed?

This elaborate and well researched edge of your seat thriller conceived by Toby Dow in his debut novel and masterfully woven by award winning author Caron Tate is the first ever collaboration by these two great minds. This suspenseful story, riddled with misdirection, is impossible to put down and brilliant in its execution.