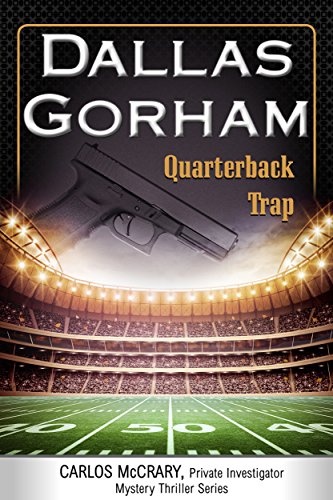 Super Bowl Week is supposed to be fun, right? One mafia boss sees it as a way to make a killing…
Then the quarterback’s super-model fiancée disappears…

Super Bowl Week is supposed to be fun, right? One mafia boss sees it as a way to make a killing…
Then the quarterback's super-model fiancée disappears…

Port City is hosting the New York Jets and the Dallas Cowboys in the first Super Bowl in its new billion-dollar stadium. Private investigator Chuck McCrary's old friend from high-school football, Bob Martinez, is starting quarterback for the Jets.

One week before the game, Martinez's supermodel fiancée, Graciela, disappears from the Super Bowl headquarters hotel. Was she kidnapped?

Martinez hires Chuck to find her, but he won't let Chuck involve the police. That same day the odds on the Super Bowl game change dramatically when someone bets a hundred million dollars on the Cowboys.

Chuck discovers that Graciela has a twisted secret that threatens her life, regardless of the outcome of the game. Was she really kidnapped, or did she run away from her own shameful secret? Martinez also has a dangerous secret that threatens to destroy his multi-million-dollar career in the NFL.

Chuck's search for Graciela takes him from the dangerous streets of a Port City ghetto to the waterfront high-rises and private island mansions of billionaires, movie stars, and crime bosses.