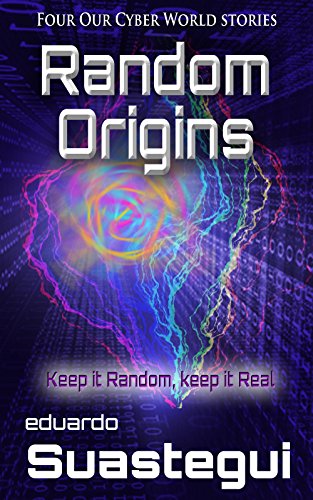 Find out how Our Cyber World got its random when you enter a world where secret government projects employ reluctant hackers to secure key national Cyber infrastructure, along the way co-opting drones and microwave ovens to do clever things.

Find out how Our Cyber World got its random when you enter a world where secret government projects employ reluctant hackers to secure key national Cyber infrastructure, along the way co-opting drones and microwave ovens to do clever things. In this world you will meet Julian Rogers before he washed out of said projects, and you will come face to face with artificial intelligence technologies whose creators struggle to control.

Together with Feral, my upcoming novel, the stories in Random Origins precede DEAD BEEF (Our Cyber World, book 1) and give insight into what happens in that full length novel. Come in and join a world of hacking while speeding along highways inside a semi trailer, of networked kamikaze drones, and a few other less than perfected tricks our protagonists tinker with.

This collection includes four long short stories: Semi, Cyber Radio, DroNET, and King's Sacrifice. What are these about?

Semi: Julian Rogers thought he went there for another hack. Sure, his contact told him to meet at a Las Vegas truck stop. But Julian needed the money to keep his Las Vegas gambling spree rolling. Instead, he will find himself barreling down the highway inside a semi-trailer, doing the hack of his life. Julian likes to keep it random and keep it real, but this ride may prove too random, even for him.

Cyber Radio: When Julian shows off how to control a microwave oven without touching it, everyone thinks it's all in good fun and enjoys the popcorn he cooks. But what if the prank-hack holds the key to breaching air-gapped computer networks? What if that possibility brings out operatives who will do anything to get their hands on this Cyber technology?

DroNET: Julian Rogers had a great idea: network a bunch of drones, and use them to deliver a Cyber payload. But the concept went nowhere for lack of Federal funding. When terrorists unleash coordinated drone attacks on the US Capitol, Julian becomes the lead suspect. Did he, embittered and frustrated, spill his idea to the terrorists? Or maybe that's all in his head. One way or the other he will show them he is the best man to thwart the rogue Dronet. Either that, or he'll die trying.

King's Sacrifice: They created an artificial intelligence with flawless predictive powers. For a year and a half, the Simulation and Emulation System (SES) has quietly predicted every major crisis and it has successfully recommended effective solutions and mitigation strategies. Now they must decide. Will they trust it when it recommends a constitutional crisis as the best course of action?