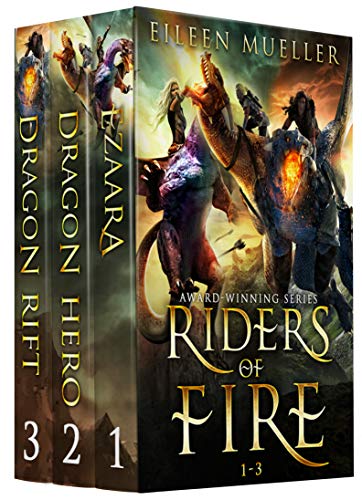 A naïve new Queens Rider. A bitter dragon master. And an enemy producing an army of cloned monsters.
Ezaara never knew dragons existed. But when she imprints with the dragon queen, she’s swept into a world she’d never dreamed of. A world of dragons, treachery and danger.
Who can Ezaara trust?

When Ezaara imprints with the dragon queen, she’s swept into a world she’d never dreamed of. A world of dragons, treachery, intrigue and danger. Now the new Queen’s Rider, Ezaara must lead her people as Commander Zens and his army of tharuk monsters rampage across Dragons’ Realm, killing and enslaving innocents. She must stop them.

But who can she trust when political intrigue puts her own life in danger?

In Lush Valley, it’s a crime to even talk about dragons…but when Ezaara meets the Dragon Queen, they imprint, forming a deep bond. She must flee and give up everything to become the new Queen’s Rider. Ignorant and unprepared, how can she possibly succeed?

Luckily, she has a dragon master — although rumors say she’d be better off with the enemy.

Plunged into a world of traitors, attacking beasts and treachery, Ezaara must pay a terrible price to save her people.

He never wanted to be a hero… but his sister is gone, his mother disappears, his father is wrongly imprisoned, and his village is under attack.

Except who to save first.

A captive dragon master. A dangerous rift between mages and riders. And a secret weapon that will tear Dragons’ Realm apart.

When Ezaara’s powerful dragon master, Roberto, is captured by Commander Zens, her world is thrown into turmoil. The council is refusing to rescue Roberto, her clandestine lover. The caverns of Dragons’ Hold echo with whispers of a prophecy that says she has no right to be Queen’s Rider. And a bitter feud prevents mages from working with riders. Tension escalates into an attempt on her life.

Ezaara must take action or Commander Zens will destroy her lover and Dragons’ Realm with his mysterious new secret weapon.