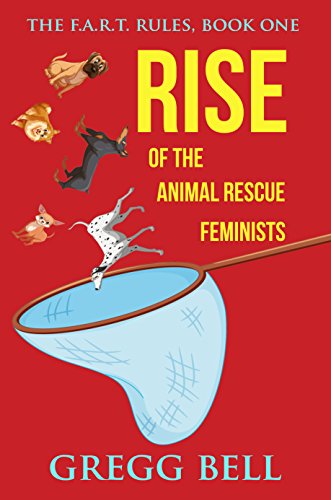 Rise Of The Animal Rescue Feminists

Lainey Tripper is a whiskey-drinking animal rescue feminist with a problem: she can’t seem to stop killing men. She heads F.A.R.T. (Feminist Animal Rescue Team), women dedicated to stopping a villain stealing Chicago’s dogs.
Will Lainey stop Donovan in time? And when she’s done, will any men be left alive?

Lainey Tripper is a whiskey-drinking hard-living animal rescue feminist. But she has just this one little problem: she can't seem to stop killing men. Not all men are so bad, and not a few of them are attracted to her, but when Lainey leaves a rescue, dead men are invariably left in her wake.

Lainey heads FART (Feminist Animal Rescue Team), a group of women dedicated to stopping the villainous Donovan from oppressing women and animals. But now Donovan, intent on world domination, has taken his evil to a new level. He's systematically stealing Chicago's dogs to sell them to a foreign power.

In Lainey's enthusiasm to stop Donovan, she again kills a lot of men. Her fellow FARTers plead with her to moderate her man-killing tendencies, but Lainey's pretty sure any guy she kills deserves it, and besides, she must do whatever it takes to save Chicago's dogs.

Will Lainey stop Donovan in time? And when she's done, will any men be left alive?