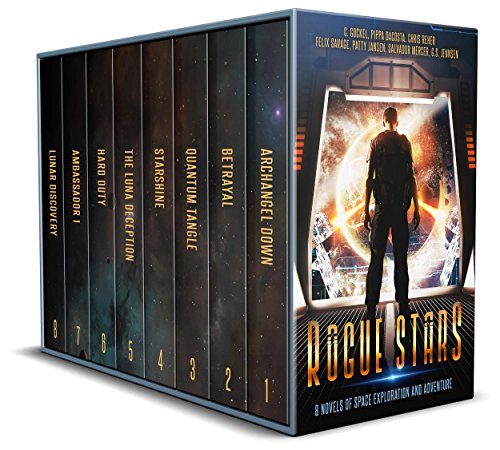 Sometimes you have to go Rogue ...Eight novels exploring the last great frontier. Rogue Stars has alien invasions, artificial intelligence, galactic intrigue, and heroes that will defy orders to do what is right.

Sometimes you have to go Rogue ...

Jump into eight full-length novels exploring the last great frontier. Rogue Stars has alien invasions, artificial intelligence, galactic intrigue, and heroes that will defy orders to do what is right.

Blast off to new worlds. Download this collection today.

Archangel Down - C. Gockel
Commander Noa Sato doesn't believe in aliens. She's wrong. In the face of genocide she must hatch a daring plan with a ragtag crew to save the lives of millions—and her own. Every step of the way she is haunted by the final words of a secret transmission: The archangel is down.

Betrayal - Pippa DaCosta
She is programmed to kill. He'll do anything to survive.
In a world where only one thousand synthetics were built, synthetic #1001 should not exist. She is no ordinary synth and the memories locked inside her code could bring the entire Nine systems, an ex-con Captain Caleb Shepperd, to their knees.

Quantum Tangle - Chris Reher
A deep cover agent fights to keep the enemy as well as his own people from taking control of a strange alien that has invaded his ship, his mind and his life. It's high adventure in deep space where the voices inside your head are all too real.

Starshine - G. S. Jennsen
Space is vast and untamed, and it holds many secrets. Now two individuals from opposite ends of settled space are on a collision course with the darkest of those secrets, even as the world threatens to explode around them.

The Luna Deception - Felix R. Savage
Who said geeks can't fight? John Mendoza is a data analyst stuck in a boring job on the Moon. His life changes when he's recruited to fight humanity's nemesis, an AI based on Mars. But soon he discovers a seamy underside to the plot. They're targeting Mercury for its rich resources … and the woman Mendoza loves is there.

Hard Duty - Mark E. Cooper
In the far future, nanotechnology will be all that keeps us alive in a brutal war with the Merkiaari. Into this war-torn galaxy a courageous Marine, an alien geneticist, and a broken hero will unite in common cause to oppose the coming onslaught.

Ambassador 1 - Patty Jansen
In Coldi society, you can get killed for looking a superior in the eye. Never mind accusing him of murder.

Lunar Discovery - Salvador Mercer
Alien technology has been discovered on the moon, and NASA scientist, Richard "Rock" Crandon must lead a desperate race to get there before America's rivals. But it isn't just the fate of Earth that is at stake in this exciting adventure.