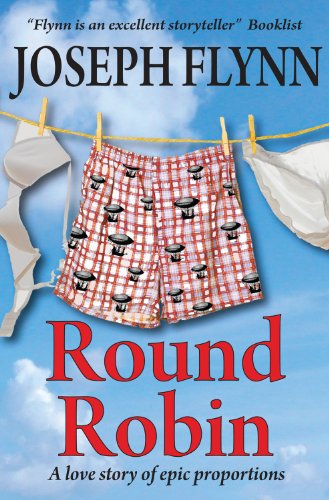 Round Robin Phinney is 230 pounds of bad attitude. When her furnace goes out, she swaps her basement apartment for the services of a live-in handyman: Manfred, a German with CIA connections and a blue-haired kid named Bianca. Robin, Manfred and Bianca all have their demons to cast out.

She's 230 pounds of bad attitude. She dishes out sandwiches and insults to the customers at Screaming Mimi's deli. She takes a dim view of people in general and men in particular.

Her home is her sanctuary. She has an apartment upstairs. Downstairs, she's created a private park, lushly landscaped, dotted with ponds, furnished with two Chicago Park District benches.

Manfred Welk is what Charles Atlas would have looked like if he'd been serious about lifting weights. A former Olympic powerlifter for East Germany, his ex-wife turned him in for spying. Brought to Chicago after the fall of the Berlin Wall, he needs a place to live.

When cold weather hits and Robin's furnace goes out, the plants in her park start to die. Worse, she has no money for repairs — but she does have a small vacant apartment in her basement. Something she might swap for the services of a live-in handyman.

After interviewing a number of prospective fix-it people, Robin finds, to her great horror, the best choice is a giant German with CIA connections. That's bad enough, but the guy turns out to have a kid, a blue-haired prepubescent brat named Bianca who's been raised in a brothel.

Robin, Manfred and Bianca all have their demons to cast out.