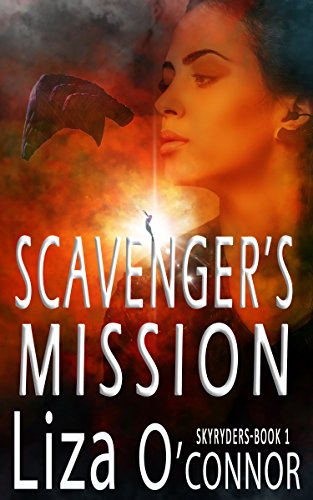 In a single month, Alisha Kane goes from a wealthy debutante to street-girl to scavenger. While testing her new flying skills in the Cully Canyon, Alisha incurs a near-death crash landing. She's taken in by a SkyRyder who risks his career to get her into the Corps.

Meet Alisha: A young woman who refuses to live the life her parents want.

In a single month, Alisha Kane has gone from a wealthy debutante to street girl to scavenger. While testing her new flying skills in the Cully Canyon, Alisha incurs a near-death crash landing. She's "rescued" by a colonel of the SkyRyders and her life changes forever.

Meet Logan: A SkyRyder colonel in charge of a sleepy fort with little to do other than arresting the occasional scavenger.

For the first time in his life, Logan's attracted to a young woman, only she's probably a scavenger and he'll have to arrest her. But first, he offers her a shower and food while he checks on his crew. His videographer has captured her extraordinary flight through the Cully and her flying is astounding!
He forgoes arresting her and puts his career at risk by asking MAC to assess her skills and integrity as a potential SkyRyder. If he can get Alisha into the SkyRyders, it will be his greatest contribution to the Corps.

Meet MAC: The Artificial Intelligence that runs the SkyRyders Corps.
Upon seeing her arrival, MAC upgrades Alisha's test. Her flying skills are not just excellent; they exceed what was previously thought possible. MAC classifies her as its top asset and soon she proves her value.

But…the SkyRyders remain a male-dominated Corps where Alisha's sense of right and wrong often clashes with her superiors. How long can a rebellious young woman survive in a regimented Corps?