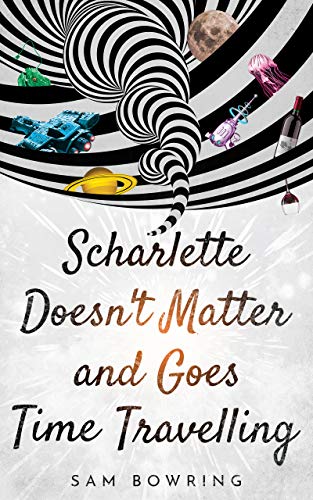 A girl with a name no one can pronounce properly finds out she never does anything important with her life, so she has no impact on the timeline whatsoever – and thus she is free to travel time and space, and have amazing adventures with heedless abandon.

Ever since Scharlette's parents gave her a name no one can really pronounce, she's been stuck in a bit of a rut. She hates her job in airport security, making people take their belts off before they fly to exotic locations she can only dream about. She owns a small apartment with large repayments, drinks bargain bin red while she watches Star Trek, and misses her little sister, lost to an exploding sandwich press ten years ago.

Scharlette fears she might live out her entire existence without doing anything or mattering to anyone. It still comes as quite a surprise when a handsome time traveller named Tomothy appears out of nowhere and verifies she is correct - that, according to his records, she doesn't matter at all.

Scharlette isn't sure this news is as wonderful as Tomothy seems to think but, as he explains, since her life was to have no impact on the timeline whatsoever, Scharlette is free to travel time and space, and have amazing adventures with heedless abandon.