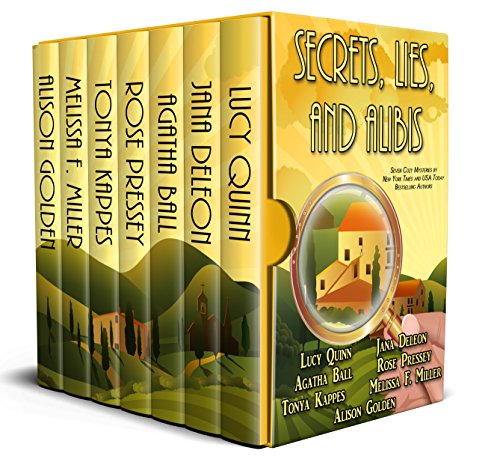 By: Jana Deleon & Others

Seven cozy mysteries in one great collection:
-New Corpse in Town by Lucy Quinn
-Louisiana Longshot by Jana DeLeon
-Rosemary’s Gravy by Melissa F. Miller
-Scene of the Grind by Tonya Kappes
-The Case of the Screaming Beauty by Alison Golden
-The Secret of Seaside by Agatha Ball
-Murder at Honeysuckle Hotel by Rose Pressey

New Corpse in Town - Lucy Quinn
FBI agent Cookie James is enjoying her extended leave from the agency on Secret Seal Isle, managing her quaint inn and flirting with the oh-so sexy-handyman, Dylan Creed…until her sixty-year-old mother goes skinny dipping and is almost drowned by a corpse.

Louisiana Longshot - Jana Deleon
It was a hell of a long shot....
CIA assassin Fortune Redding is about to undertake her most difficult mission ever—in Sinful, Louisiana. With a leak at the CIA and a price placed on her head by one of the world's largest arms dealers, Fortune has to go off-grid, but she never expected to be this far out of her element. Posing as a former beauty queen turned librarian in a small bayou town seems worse than death to Fortune, but she's determined to fly below the radar until her boss finds the leak and puts the arms dealer out of play. Unfortunately, she hasn't even unpacked a suitcase before her newly inherited dog digs up a human bone in her backyard.

Rosemary's Gravy - Melissa F. Miller
Personal chef Rosemary has more experience sautéing than sleuthing. But when her client dies from an allergic reaction, Rosemary must clear her name. She would never bring peanut oil into her boss's house — so who did? A witty and satisfying mystery from a USA Today bestselling author.

Scene of the Grind - Tonya Kappes
Roxy's life couldn't be better. Business was booming, she's reconnected with special people from her past, including her first teenage love, and visits The Crooked Cat book store, which is still her favorite shop in Honey Springs. One problem, Aunt Maxi and Alexis Roarke, owner of Crooked Cat, aren't on the best of terms. And when Roxy takes Alexis a fresh cup of coffee from The Bean Hive and a tasty pastry as a peace offering between the two women, she discovers the beloved book store owner murdered and Aunt Maxi is the number one suspect. Gossip in Honey Springs is as hot at the coffee served at the Bean Hive and Roxy has to uncover who is behind the murder not only to save her shop, her aunt, but her life.

The Case of the Screaming Beauty - Alison Golden
The prestigious Lavender Bed and Breakfast in Chiddlinghurst, England has a rich, Tudor atmosphere, an enviously manicured lawn… And a deadly problem. A young, beautiful woman, Norah Travis, has been found murdered in one of the rooms with no witnesses and seemingly no motive. Detective Inspector Graham, a man with a singular drive, a penchant for tea, and silent demons of his own, has been brought in to ferret out the perpetrator.

The Secret of Seaside - Agatha Ball
Paige Comber dreams of running off to Paris to train at the Cordon Bleu, but fresh out of college, she is stuck running her granny's coffee shop in the small town of Seaside. It looks like a lousy summer until a handsome stranger named Nate arrives.
He's here to help his Uncle Byron with his affairs, but when his uncle's body washes up on the beach and Nate is thrown into prison, it is up to Paige to find out which of the town's colorful characters might have been crazy enough to do it.

Murder at Honeysuckle Hotel - Rose Pressey
When Raelynn Pendleton inherits a Victorian house, she jumps at the chance to turn it onto a hotel and turn her life around.
But before the new Honeysuckle Hotel even opens for business, Raelynn discovers the body of a young woman in the garden. As a newcomer in town, Raelynn is blamed for the murder. She's fired from her job, which could mean she'll lose the house. The only way to save Honeysuckle Hotel is to find the real killer - with or without the sexy Sheriff Kent Klein.
One way or another, Honeysuckle will be buzzing.