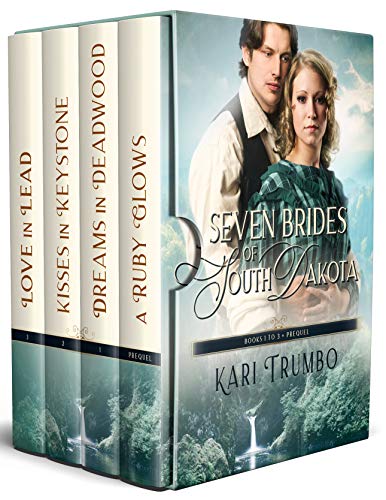 Follow the family saga of the eight Arnsby sisters. As pioneer women, these sisters know the struggles they are about to face, but never dreamed of finding love to walk alongside them. Will the rugged men of the Old West be just the men

When Beau walks into her life, one glance has her running from her past. He couldn’t want someone like her. It should be easy to avoid his quiet charm.

If he can convince her she’s a prize, not prey, he might have a chance. Beau’s captivated when Ruby scrambles from him whenever he gets too close. Her sweetness is an allure he can’t fight.
Can Beau convince Ruby she is beloved?

Book 1 Dreams in Deadwood
He has a vice as bad as her father.
Jennie Arnsby wants nothing more than to turn around and go home. Her family is on their way to Deadwood, SD, when Aiden finds his way to their small wagon train. His teasing and banter leave her wanting to toss him out the back and in the dust. When they are separated outside the city, she is left wondering if she’ll ever see him again.
Aiden Bradly wants to find his gold and return home. Nothing more. He can’t afford to get tangled with a woman. He’s doing just that until he meets the feisty Jennie. She gets him thinking about his past and forgiveness, but what’s more important, his past or his new future?
Aiden will either redeem his past or claim a treasure greater than he could ever imagine, but he must choose one.

Book 2 Kisses in Keystone
Hattie Arnsby’s been a slave to men and whiskey for the last year.
She’s drowned herself in drink to avoid her life at the Red Garter Saloon in Keystone, SD. When a handsome deputy finds her after a year of searching, she finally sees a sliver of hope.

Hugh Bradley is deputized to find Hattie and bring her home, but her captors aren’t ready to set her free. He must help her be rid of the drink and the binds of the brothel.
But when Hattie’s handed temptation, will she run back to her past or embrace the love growing between them?

Book 3 Love in Lead
He found her at her worst, can she love him at his?

Eva Arnsby can’t stay indoors, her need to draw the woodland creatures around her home near Lead, South Dakota gets her in a heap of trouble. And none more troublesome than a shadowy stranger who steals her notebook and her spirit.

Ranger, Captain George Roth, is suspicious when he finds a small woman in man’s trousers sneaking around in the woods. Determined to discover the woman’s secrets, he takes on an assignment, ready to investigate her under the guise of a harmless town dandy.

A chameleon in a suit, Mr. George Roth is asking too many questions, and wearing too many masks. Despite Eva’s reluctance, they work together, and soon, she sees parts of George she can’t resist. Shouldn’t she follow her heart? But when the mask slips, and Eva realizes George isn’t who she thinks he is, the damage to her heart may never be mended.

One lie will break them apart, and George must convince her that the man she fell for in Lead is the same man who loved her in the woods.