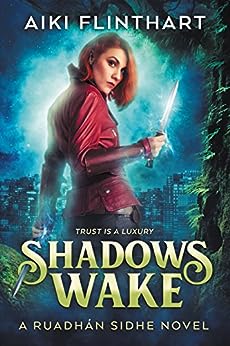 Rowan has been running her whole life. Hiding her strength and speed. But another kidnap attempt, in Cairns, Australia, forces her to take a stand. With new allies she'll hunt down old enemies and try to understand her gifts. But doing so will awaken a darkness she can't control.

Rowan Gilmore and her mother, Anna, have spent most of Rowan’s life running, hiding Rowan's speed, strength and precognitive powers—but without knowing why she’s different, why they have to hide, or who from.
And Rowan’s sick of running scared. But she has to continue, because she also harbours a dark power that emerges only when she’s afraid or in danger.
A power that can kill indiscriminately.

When she moves to Australia, a street fight reveals Rowan's abilities to a stranger, Fynn, and she must decide whether to run again or stay and risk discovery by her pursuers. Her mother has found happiness with a new partner and Rowan is reluctant to wreck it. So, after foiling another kidnap attempt, Rowan makes her decision. The time has come to stand her ground.

Fynn becomes and unexpected ally, with promises to help fight her unknown enemy – and to reveal the truth behind her extraordinary abilities. But what’s his agenda? Can he be trusted?
And who are the Mors Ferrum operatives he says are chasing Rowan? What do they want? What is the ocair thing they keep asking about?
Rowan has too many questions and not enough answers; too many unknowns - including herself.
For what happens if the darkness lurking in her mind wakes and comes out to play?