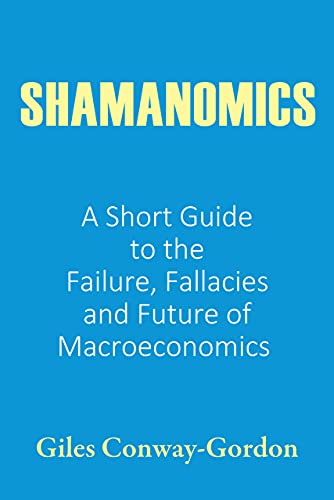 The global financial Crisis of 2008 demonstrated the comprehensive failure of Economics and of the theory of economic management which has dominated Economics for more than 50 years.

The global financial Crisis of 2008 demonstrated the comprehensive failure of Economics and of the theory of economic management which has dominated Economics for more than 50 years. It was, in particular, a disastrous failure for macroeconomists, those economists who deal with the big economic factors like growth, inflation and employment and who act as policy advisors to governments.

This book explains the reasons for this failure. The strong growth and soaring financial markets of the 1980s and ‘90s led to a complacent belief that economists had definitively solved the central task of economic management: delivering durable, non-inflationary growth (We Did It!). The reputation and influence of Economics and economists soared in parallel with the markets.

As the 2008 Crisis proved, this confidence was badly mistaken. This book identifies the guilty parties, whose uncritical belief in the dominant theory led to the Crisis, and the few ‘wise virgins’ who foresaw it. It describes the significant fallacies in the dominant theory and notes the end result of the dominant economic method: elaborate, opaque and abstract mathematics with negligible real usefulness masquerading as expert foresight.

The book queries the mistaken belief that Economics is a true science, comparing the negligible progress in Economics with the extraordinary advances in genuine scientific fields such as chemistry, physics and medicine and, in engineering, the development of flight, from Kitty Hawk to the Voyager mission. It notes the unfortunate effect of the Nobel Economics Prize in perpetuating this belief. The inherent indeterminacy of Economics means that, rather than scientists or engineers, economists should more accurately be regarded as novelists.

The book reviews the post-Crisis literature, including the accounts of the guilty parties (We Didn’t Do It!), conference reports and the commentaries of central bankers, other professional economists and journalists. Finally, the recent work of some social and political thinkers, with the insights of behavioral economics and randomized controlled trials, are welcome signs of a future where moral and social consequences resume their rightful place as the proper yardsticks for measuring how useful Economics and economists really are.

With very few exceptions macroeconomists have proven little better than shamans - witch doctors - muttering their opaque ritual incantations and failing in their social function. Yet they continue to enjoy an attention and respect which is wholly undeserved. It is time for this dangerous delusion to stop.