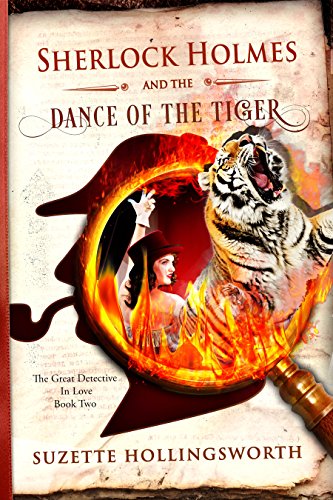 Sherlock Holmes & The Dance Of The Tiger

Revolutionary terrorists, a dead British agent, a man-eating tiger, & the Commander of the British Army cavorting with a Russian spy. Now we have a national emergency. Despite being a master of disguise, Sherlock Holmes is unable to infiltrate the Parisian circus as the tiger trainer's female assistant.

Revolutionary terrorists, a dead British agent, a man-eating tiger, & the Commander of the British Army cavorting with a Russian spy.

Since the assassination of Czar Alexander II in 1881, the oppression of the Russian people has increased dramatically under the rule of the new Czar, Alexander III, fueling the flames of revolution. Cirque d'Hiver, the Parisian Circus, becomes a hotbed of anti-czarist activity in France. An undercover British agent is the target of a gruesome tiger attack. If that isn't enough, the Commander-in-Chief of the British army (and the Queen's cousin) cannot be dissuaded from romancing a circus barebacked rider and wanders into the middle of a known spy ring.

Now we have a national emergency.

Despite being a master of disguise, Sherlock Holmes is unable to infiltrate the circus as the tiger trainer's female assistant, finding that he is neither attractive nor convincing in tights. Enter Sherlock's laboratory assistant and chief bottle washer, Mirabella Hudson, whose youth and gender are her protection against suspicion.

While Sherlock enjoys a lavish Parisian hotel, solving the case in comparative luxury, and Dr. John Watson romances a circus beauty and supposed Russian spy, Sherlock orders Mirabella to face man-eating tigers. She becomes a circus performer overnight in the Cirque d'Hiver in Paris investigating anti-czarist espionage activity, searching for a lost Zulu princess, solving the murder of a British agent, and protecting the world from the leakage of British military secrets to Russia.

Monarchies are collapsing daily and the world is on the brink of revolution. But most importantly, the game is afoot!