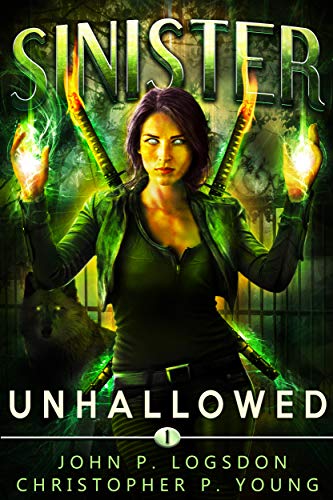 They thought they could destroy House Sinister for good, but they weren’t expecting her...

They thought they could destroy House Sinister for good, but they weren’t expecting her...
Evangeline, a hellion born with the gifts of dual-blades and advanced magic not seen for over a century, had been living a great life as a Guard at House Sinister for many years.

But her world is shattered when three rival Houses attack, forcing her to watch powerlessly as her mentor and father figure, Garrick, is slaughtered. His dying command: The House must survive at all costs. With Evangeline being the only remaining member, that means she must survive a full year. It's the only way to restore honor to House Sinister.

Pissed that she has to leave, Evangeline obeys Garrick's final words and escapes, fleeing the Netherworld to a place called Los Angeles.

As a hellion, she must find a normal to possess, since that's the only way to hide from the assassins who are hot on her trail.

Too bad she catches the eye of the Black Ops Paranormal Police Dept.

In exchange for keeping her secret, she agrees to be their assassin, but she's damn sure going to bitch about it. There's a glaring problem with joining the PPD...a hellion wielding crushing magic and blazing dual-blades is like a Tasmanian devil on crack.

Evangeline will play this game of assassin for now, but her mission--her true mission--is to exact revenge on the Houses who destroyed her world and shattered her life. Though, she must admit, killing a few of the bastards now won't suck.

When her year on the run ends, she will bring pain and death...