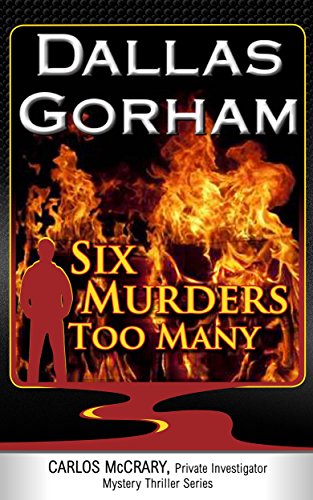 Six Murders Too Many

The plan was perfect; all it took was two simple murders… Millionaire oil man Ike Simonetti and his model-slim wife, Lorraine, arrive at Chuck McCrary's office to claim that Ike's stepmother is trying to steal $400,000,000 from

The plan was perfect; all it took was two simple murders…

Then an over-zealous assassin exterminated an extra victim and things got out of hand.

Now on his first big case as a newly-minted private investigator, Carlos "Chuck" McCrary must untangle a web of fraud, arson, adultery, and murder before he becomes its next victim.

Millionaire oil man Ike Simonetti and his model-slim wife, Lorraine, arrive at Chuck McCrary's office to claim that Ike's stepmother is trying to steal $400,000,000 from him.

Chuck learns that while Sam Simonetti, Ike's billionaire father, was hospitalized for his second heart attack, Sam's two daughters from an earlier marriage died in a house fire, leaving Ike as Sam's only child. When Sam died in the hospital, Ike was the sole heir to Sam's estate. Or was he?

There is another contender for the fortune—a baby girl born to the dead billionaire's hot young trophy wife (now widowed) six months after Sam's death. The widow has staked a claim to half of Sam's billion-dollar estate for her infant daughter Gloria.

Now Ike wants Chuck to determine the identity of Gloria's real father and cut her out of the will.

The investigation takes Chuck from the sun-splashed beaches of South Florida to the burned-out Cleveland home of the two dead daughters. He stirs up a hornet's nest and uncovers a triple murder.

When mob hitmen ambush Chuck, the case becomes a matter of life and death. To save his own life and that of the supposed infant heiress, Chuck must discover if one of the billionaire's surviving family members is the real puppet master behind the murders.

Then Chuck learns that there may be two Black Widows dueling over the billionaire's estate—willing to kill anyone who gets in their way... including an infant heiress and a nosy private investigator.

Bodies pile up as Chuck conspires to hide Gloria to keep her safe from the shadowy killer while he solves the mystery of Gloria's paternity.