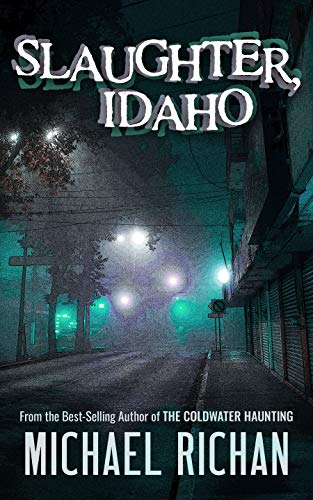 Slaughter used to exist in Idaho years ago. Something happened to the town, something that caused it to fall a fraction of a second behind the rest of our timeline — and the entire town disappeared.

The horror comes every sixteen years…

Slaughter used to exist in Idaho years ago. Something happened to the town, something that caused it to fall a fraction of a second behind the rest of our timeline — and the entire town disappeared.

Andrew knows the rare skill of travel between timelines, but finding a town like Slaughter — unmoored, isolated, drifting in time — is a difficult task, and traveling to it is even harder.

The space between timelines is a hunting ground for strange creatures that feed on meat they find in places like Slaughter. Andrew lands in a town under siege, with residents arguing about how to best prepare for the invaders who arrive every sixteen years.

He meets Helen, who lost her parents in the last attack. The next cycle is due any day, and the town is hunkering down, deploying new defenses. When the creatures arrive on schedule, Andrew and Helen try to repel the attack, but they are overpowered: people are dragged from their homes and rounded up like cattle, then fed while still alive to giant Eaters. It’s a huge farming operation for the invaders, where half the town’s population will be used as food.

The attack usually lasts for days, but this time, the invaders leave suddenly, well before their normal departure, sparing most of the town. The citizens think they’ve been lucky, but Andrew and Helen soon learn the truth: the worst is yet to come.

Can Andrew and Helen convince the town of what they’ve learned? Or will the citizens of Slaughterid ignore them, thinking they dodged a bullet? The political and religious forces within the town all have their own agendas, and Andrew and Helen’s warnings don’t fit nicely with their plans.

When the new terror arrives, they’re completely unprepared…except for the few who listened.