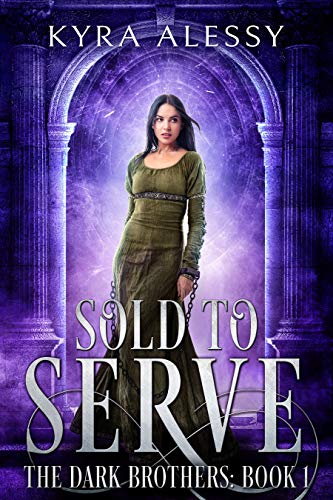 In a land where anyone can be enslaved for a price, Kora finds herself on an auction block...If you like steamy fantasy romance, strong yet vulnerable characters, and your RH stories with bite, you'll love Kyra Alessy's exciting beginning standalone to the Dark Brothers Series.

A woman in the wrong place at the wrong time. Three cruel mercenaries who could be her saviors … if they don’t kill her first …

Kora ran away to start a new life where she was in control of her own destiny and her own body. Instead, she was captured and auctioned to the highest bidders: Three former mercenaries with black hearts.

Mace is their leader; ruthless and unforgiving. Kade lives in the shadows and, if his growls are anything to go by, may not be a man at all. The third one, Lucian, seems to delight only in wine and tormenting their new possession until she breaks ... and she might. Kora wasn’t a slave before and she must keep that secret at all costs. If they learn who she is, she’ll be forced to marry a man who scares her far more than her harsh masters.

Can she escape these three dangerous Brothers who have begun to show her that there is more to them than their tragic pasts? And if they find out her secrets, can she trust them not to throw her to the wolves?