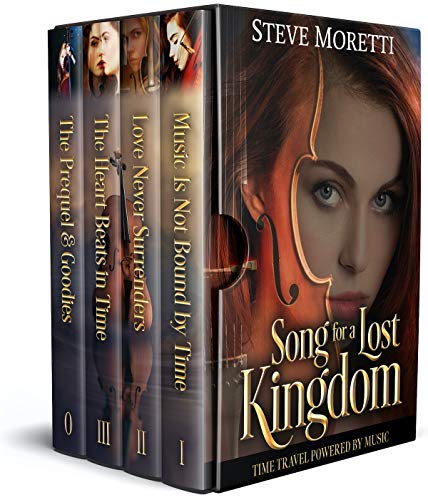 “Embedded in my soul forever.” A time-travel Box Set adventure powered by an ancient cello that intertwines the souls of two women across time. Both are loved by the same man doomed to die after the Battle of Culloden in 1746. Can they save him and change their future?

“Embedded in my soul forever.” A time-travel adventure powered by the mysterious musical forces that connect two women across time through their cello. The two gifted composers are transposed into each other’s world and find their souls have somehow intertwined.
In 2018, an aspiring young cellist dreams of joining the National Arts Centre Orchestra in Ottawa. But after a crushing rejection, a new hope emerges in the form of a long lost music score from her dying grandmother in Scotland.

In Book I of the Song for a Lost Kingdom series, Adeena Stuart plays this music on the oldest surviving cello made in the United Kingdom, and she’s connected to another woman from the past, Katharine Carnegie.

Katharine living in 18th century Scotland is also a cellist and a composer. Their connection is augmented by the love of the same man doomed to die after the Battle of Culloden in 1746.

In Book II, James Drummond fights alongside Prince Charles Edward Stuart in the 1746 Jacobite uprising. Though their cause is doomed, and James is destined to die shortly after the Battle of Culloden, Adeena’s determination to save him never wavers.

Left behind in the present, Adeena’s friends and families are equally determined to return her to 2019 before the expanding growth in her head becomes fatal. But even they are deceived by the truth of what is about to unfold.

In Book III, the final instalment of the series, Adeena and Katharine Carnegie search for the music that neither can complete on their own.

Finding themselves living three centuries apart and each assuming the identity of the other, they must overcome their own unique challenges, all the while hiding the truth of who they really are from those around them.

The box set is specially priced and also includes the Prequel to the series plus bonus goodies such as the sheet music and lyrics to three original songs featured in the books. (Song for a Lost Kingdom, The Heart Beats in Time and A Foolish Man).

Other bonus features include character profiles and a forward by series editor Lara Clouden.

The Song for a Lost Kingdom boxset includes:

Book I: Music is Not Bound by Time
Book II: Love Never Surrenders
Book III: The Heart Beats in Time
The Prequel: A Kingdom is Lost, A Song is Born.