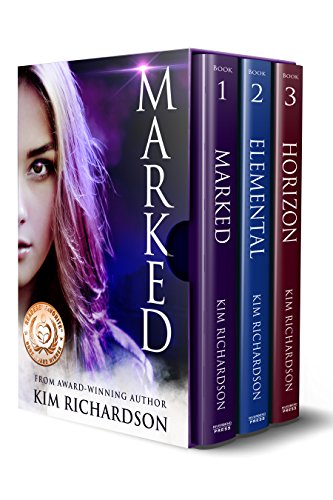 Enter the world of Soul Guardians with this great introduction to Kim Richardson's best-selling series. This bundle includes the first three books.

Sixteen-year-old Kara Nightingale is unpopular, awkward and positively ordinary—that is until one day she is struck by a bus and dies...

Within moments her life changes from ordinary to extraordinary as she wakes up in a mysterious world with a new career—as a rookie for the Guardian Angel Legion. Kara is pulled into the supernatural where monkeys drive the elevators, oracles scurry above giant crystal balls and where demons feed on the souls of mortals.

When an Elemental child is kidnapped, Kara is sent on a danger-filled quest and plunges into a situation more dangerous and deadly than anything she could ever imagine.

From the best-selling author comes this captivating, funny debut novel and winner of the Readers' Favorite Award.

When seventeen-year-old Kara Nightingale is suddenly struck by lightning and dies—yet again—she finds herself back in Horizon, where angels, oracles and other supernatural beings occupy a mystical world unknown to humanity.

But when Kara accidently strikes an angel with her newfound powers and nearly kills him, she is banished to the angel prison Tartarus. What's more, Kara soon discovers her mother's soul has been taken by Demons.

Hunted by the Legion, Kara takes refuge with a new band of angel friends. And when she decides to venture into the Netherworld to find her mother's missing soul, will her powers be enough to save her mother and save the mortal world?

Much to Kara's horror, a horde of demons is released into the mortal world, through the Mirror of Souls. Thousands of human souls are dying every day. The Guardian Angel Legion works relentlessly at trying to secure the mortal world from Demons. But when Kara discovers the truth behind the Demon Lord's plans, can she return to Horizon safely and warn the Legion before it's too late?