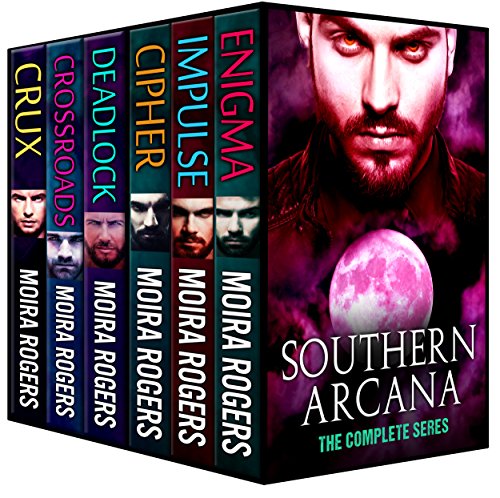 Book #1: Crux - A woman's discovery of her supernatural heritage plunges her into the midst of a new and terrifying world, one where her past defines her destiny and falling in love with the wrong man--like the spell-slinging investigator who sets her heart racing--could be her downfall.

Book #2: Crossroads - Duty and desire stand on opposite sides of the fine line a shapeshifter princess must walk. Falling in love is dangerous enough. Falling in love with a man who was turned into a wolf instead of born as one means risking everything--her family, her heart...and possibly his life.

Book #3: Deadlock - A human daughter isn't of much value to a shapeshifter family unless magic can wake her inner wolf. But playing with powerful spells is dangerous. The only man who can help her is the most powerful wolf in New Orleans--and her family's enemy.

Book #4: Cipher - The psychic gift of empathy can be a blessing or a curse. For one girl, it's a deadly weapon. She killed once to protect the man she loves. Now he's a lethal alpha wolf ready to do anything to protect her. But the greatest danger they pose could be to each other.

Book #5: Impulse - It's hard to be a rare submissive shifter in a town full of over-protective alphas. Especially for a woman desperate to claim her own independence. Avoiding dominant wolves is the easy answer, but the only man who makes her feel strong is one of the most powerful wolves in the Southeast—a man whose family would kill to protect their legacy.

Book #6: Enigma - Two bounty hunters. One mystery. On the clock, they're the perfect supernatural-crime-solving team. After hours, she's ready to rock his world. But he won't settle for just her body. Daring to risk her heart might be the first fight she loses, and the stakes have never been higher. Because he'll sacrifice anything for her. Even his life.