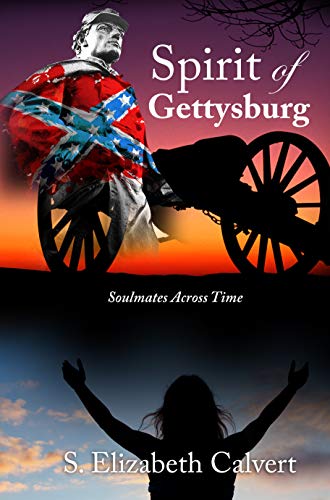 Spirit Of Gettysburg: Soulmates Across Time

Can ghosts die twice? Apparently so. To prevent her husband's death at the hands of his personal, implacable enemy, headstrong, vulnerable Maureen McAlister time travels back to...1863. Fail and he is doomed forever. Succeed and they are together forever. She is terrified. What if she fails him...again?

Epic...Spellbinding...Thrilling Love Story Extraordinaire! Can ghosts die twice? Apparently so!
Washington, D.C. psychic to the powerful elites headstrong, vulnerable Maureen McAlister flees a contemporary, shattered life into the ghostly, loving arms of Confederate soldier Major Clayton Fontaine Douglas, her former husband and one-true-soulmate. He is the only man she loves and trusts. Clayton, an unrepentant Rebel and proud, brave officer in General Robert E Lee's Army of Northern Virginia, is now a ghost stuck in time in her inherited Gettysburg, Pennsylvania estate. He is furious at God for the loss of his Country and her. He is dying again because of her. Once more she must try to save him, change his fate and rewrite karma.

How? Time travel to 1863, persuade him to avoid Pickett’s Charge during the Battle of Gettysburg, prevent his untimely death at the hands of his personal, implacable enemy and live with him again at Wildrose Hill, their beautiful home near Shepherdstown, West Virginia. It is a second chance for Maureen and Clayton, another test of their true, eternal, soulmate love. Fail and he is doomed. Succeed and they are together forever. She is beyond scared. What if she fails him...again?