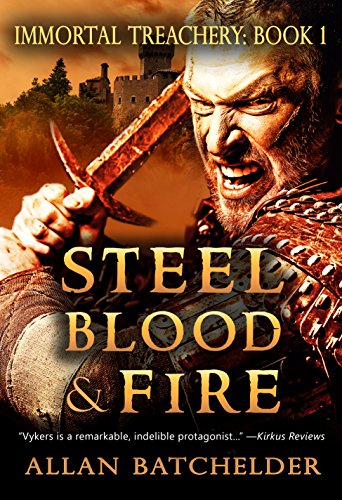 Tarmun Vykers is the greatest warrior the world has ever known, but also a ruthless and bloodthirsty bastard...and mankind's only hope.

You are the greatest warrior ever known. When kingdoms rise or fall, you are usually the reason why. But you also have the world's most powerful enemies, and they are about to take a terrible vengeance…

TARMUN VYKERS
Is an artist of death. He uses his sword to paint with the blood of his enemies. His awestruck opponents call him The Reaper, an iron-willed man with no memory of his past, a ruthless champion who has risen to the level of death incarnate.

But The Reaper has collected a legion of enemies as he cut a bloody swath through the greatest of heroes and villains. And these dogs have finally had their day, exacting a revenge both cruel and creative.

Wandering lost, horribly disfigured and unable to fight, Vykers stumbles across the bones of a half-buried skeleton that can transform his ruined body in an inconceivable way. But first he must make a devil's pact with…

ARUNE
A secretive, ghostly sorceress with ambitions of her own. If Vykers wants to wield a sword again, he must surrender to Arune that which he holds most dear. But can he trust this ethereal enchantress to hold up her end of their dangerous bargain?

Vykers has few good choices, and he must make them quickly, for an impossibly talented and savage wizard has arisen to threaten all of humanity…

THE END OF ALL THINGS
Once an autistic boy hardly able to speak, The End has evolved into a supernatural terror bent on extinguishing all life. A fearsome and unequaled tactician, The End is the only person who doesn't fear "The Reaper."

To have any hope of defeating this bloodthirsty mage, Vykers must gather the strangest, most dangerous cohort of killers ever assembled. Then he must seek out the only weapon that can defeat this terrible adversary…

THE SWORD WITH NO NAME
A sentient weapon whose arcane mind has descended into madness. The sword seeks to consume the soul of any man who dares to touch it. But Vykers is not just any man, and he is determined to test his will against the fiendish weapon, a weapon that will surprise him as he enters…

THE EPIC BATTLE
Behold the greatest clash of men, monsters, and Fey that the kingdom has ever known. Vykers, at the head of his outnumbered contingent, launches a desperate attack against The End, with the fate of the world hanging in the balance.

But The End is a creature worthy of his name. He has forged a secret weapon, a wicked and terrible instrument that will break through Vykers' defenses and exact a devastating toll.

Only one thing is certain, this extraordinary battle will end in a way that no one could have predicted!