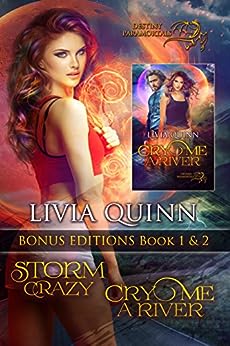 Jack’s a former Navy pilot and sheriff but when he finds out the truth about his new girlfriend and his “safe” small town, he’ll likely grab his daughter and take the first F-18 out of Destiny. “This series is like a mini-vacation from the real world.”

Storm Crazy Bonus Editions Books 1 & 2 paranormal romance—a world of dragons, storm witches (tempestaeries), vampires, shifters, and fae protecting mankind while searching for their fated mates in the Paramortals urban fantasy world. It’s a fun, emotional and quirky ride with twists and turns that will keep you guessing and relationships that make you want to come back for more. “Come to Destiny, you won’t want to leave.”

This series is the continued story of Jack Lang and Tempest Pomeroy and the rest of Destiny on their Paramortal journey. They are not standalones.

Welcome to Destiny, or I should say Middle Earth…
Jack Lang, sheriff, former Navy pilot.
To say Destiny was not what I expected would be like saying Wolverine's fingernails were long enough for a manicure. I'd been looking for Mayberry, a quaint little safe town to raise my daughter. That ship sailed when I met Tempest Pomeroy, who turned out to be a storm witch with a djinni brother and an ex who was… hell, I don't know what he is. But I wasn’t sure I could stay. I had a teenage daughter to consider.

Tempe Pomeroy, Tempestaerie, mail lady, and - as Jack likes to say - trouble magnet.
Isn't it just like a man to exit a relationship when he finds out a woman has a few little secrets? Following Jack's, um, enlightenment, he finally started investigating my little brother's disappearance, but time is running out and our relationship has gone from attraction to suspicion, support to friendship, romance to oh-my-god-get-away-from-me revulsion.
Jack’s an ex-Navy pilot. He says he wants to know “everything”. He may stick around, help me save my brother and discover the whereabouts of my parents, but I doubt he’ll still want to take me to the Mardi Gras ball, once he knows “everything”. He'll probably take the first jet out of Middle Earth. 'Cause there’s a lot of everything…