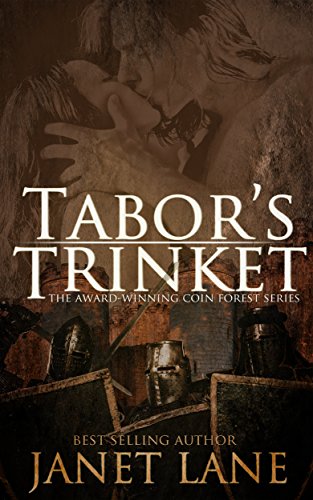 Love proves perilous in this best-selling novel of the Gypsy slave, Sharai, who becomes a dancer and meets the dashing Lord Tabor. They share an instant connection, but Tabor's fiancee orders her gone. His fiancee can save his lands and political standing, but Sharai can save his heart.

Sold as a slave in Romania for seven pounds and three solidi, the Gypsy girl, Sharai, escapes a slave ship infected with the plague. As an adult, she performs her silky, exotic dances to earn enough to sustain herself and the toddling orphan girl she adopted. She yearns for relief from the grinding poverty, and a secure home. Having been violated by a nobleman posing as her hero, she wants naught of any other man of title, and also scorns the dubious Gypsy king who pursues her. In a tent at the bustling autumn fair in Winchester, she meets the dashing Lord Tabor, and her resolve to avoid all noblemen softens.

Though possessed of a stately castle with prosperous lands, the English knight,Tabor, teeters on the brink of losing all his holdings. A powerful noble has attacked Tabor's castle, determined to seize his lands. Tabor seeks revenge for his older brother's murder, but England's throne is held by an infant king and his feuding uncles. The realm is paralyzed with uncertainty and lawlessness, and the crown has abandoned him.

Then a stroke of good fortune helps Tabor, a sizeable dowry that can save his holdings. He need only wed an earl's daughter, the regal Lady Emilyne. But he has already fallen in love with Sharai, and they are locked in a powerful dance of desire. His refusal to abandon Sharai plunges them into life-and-death struggles--and a painful choice between duty and love.

The story, book one in the four-volume Coin Forest series, is set in a unique period in history when Gypsies were welcomed, their travels even financed by the nobility in the countries in which they traveled. Dubbed the Gypsy social honeymoon period, it lasted for just a few decades as the Gypsies ventured into Western Europe. Growing mistrust, a waning interest in pilgrimages and increasing incidents of thievery and racial/culture clashes combined to end the honeymoon. The incidents in Tabor's Trinket occur as the honeymoon begins to sour.