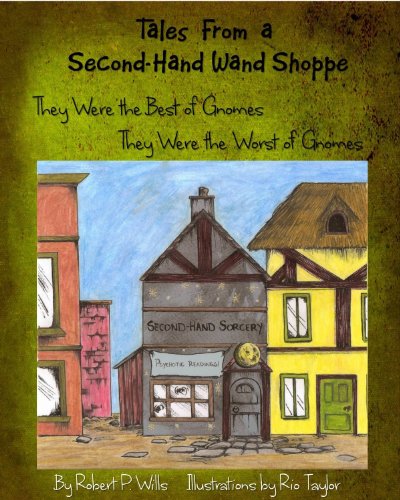 Two Gnomes combine their used wand shops to increase sales. It seemed like a perfect plan. Unfortunately one is a little unstable -even for a Gnome. Town ordinances are broken. Neighbors are annoyed. The Magician Guild sends over enforcers. The town constable gets involved. And that's the good news!

Everything changes when they combine their talents:

City ordinances are broken. Neighbors are annoyed. The Constable becomes involved. Even the Magician's Guild sends over some Enforcers to deal with them. Twice. Things are looking up for the Gnomes!

From multi-headed travelers looking for a good time, mysterious hooded figures who aren't what they seem, to Half-Orcs just trying to obey their mates, everyone seems to come to Second-Hand Sorcery to either buy or sell a wand.

Along for the ride are a neurotic Jousting Dummy, an immortal (so far) Rat, a Trolless who runs the Tavern across the street, a Dwarf next door with (alleged) Mob ties, and the Head Mistress of the local School of Magic (with definite Mob ties).

Did we mention the impending invasion by the army of the Great Halfling Empire? They are going to cause some issues as well!