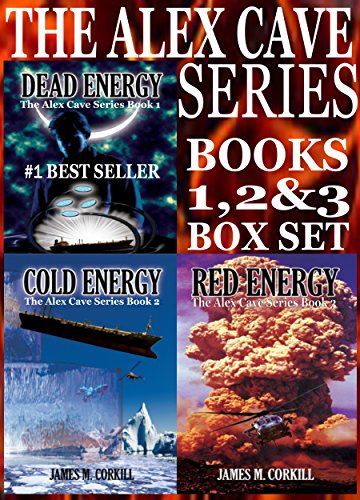 One man’s quest to save humanity from global environmental deserters in these three great stories.

Dead Energy.
The tanker left Valdez Alaska with a full load of crude oil for what started as a routine trip down to Washington State, until it entered the Puget Sound and the oil mysteriously vanished without a trace.

Alex Cave, a geophysics instructor from Montana, was on vacation sailing the waters of the Puget Sound, when a brilliant flash of light to the north caught his attention. He listened for the deep rumble from an explosion, but the only sound was the frantic voice through his boats radio, desperately screaming for help, and yelling out a set of coordinates. When he changed course to render assistance, he had no idea this would be the start of an epic adventure, where he would be the only person capable of saving humanity from self-destruction.

Can Alex, who is also an ex-CIA operative, solve the mystery before it's too late? Or will our dependency on oil cause us to suffer the consequences of.DEAD ENERGY!

Cold Energy.
Alex Cave, a geophysics instructor in Montana, receives an urgent call from his friend about unusual seismic activity in the Pacific Northwest, which had just destroyed the city of Victoria Canada, and awoke the sleeping Mount Baker volcano. Realizing his family lives near the base of the mountain, he immediately leaves to try to find out why it's happening, before Mt. Baker explodes.

On the way, his friend Martin Donner, the Director of National Security, asks for his particular skills to figure out what caused the Polar Ice Sheet to expand by thousands of square miles in a matter of minutes. Alex knows if he cannot find a way to stop the expansions from continuing, the world will enter a new ice age.

Now Alex is torn between trying to save his family from the deadly eruption, and stopping nature from destroying humanity with.COLD ENERGY!

Red Energy.
Alex Cave, a geophysics instructor tasked with coordinating the recovery of several items of advanced alien technology from the Bering Sea, discovers he is betrayed by one of the crew, who will stop at nothing to obtain one of these powerfully destructive devices. Alex knows that if this technology falls into the wrong hands, it could cause the end of all life on the planet. If this wasn't enough, his past actions while working for the CIA have come back to haunt him, and his loved ones are put in grave danger.

On this emotional roller coaster, Alex literally feels the weight of the world on his shoulders as he is torn between saving the ones he loves, and saving humanity from extinction. Is there a way he can save both? Or will all life on the planet be destroyed by.RED ENERGY!