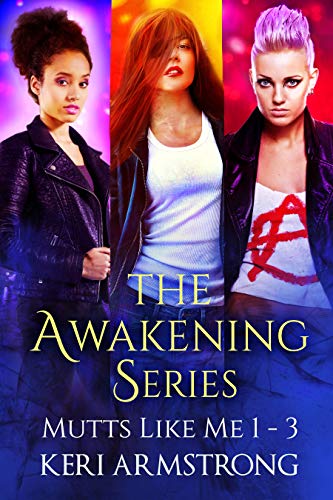 Monsters roam the world – hidden within governments and your home town. Some good, some evil. Join Marti, Phoebe, and Alison as they battle evil, make friends, and maybe find love and family along the way.

The Awakening Series – Mutts Like Me Books 1-3
Every mythical creature you’ve ever heard of is real, the product of genetic engineering by an ancient race. An ancient race who put themselves into stasis in the antediluvian past, leaving their engineered and hybrid “Mutt” offspring to their doom.

They never expected them to survive.

Now those ancient beings are awakening, and they intend to enslave the remaining Mutts and humans.

But the Mutts won’t go down without a fight – they’re coming out of the supernatural closet and enlisting human aid – and they intend to win!

Orphaned Marti just wanted a peaceful family holiday with her grandmother; what she got was pulled into a war with creatures she never imagined actually exist.

One-eyed, one-handed Phoebe has lived a fairly uneventful life; at 21, she’s never even been kissed.

Until she receives an ancient legacy that thrusts her straight into a world containing giants, werewolves, and powerful magic … and her first kiss … with a someone who may or may not be human.

Allison has been keeping many dark secrets, for many lonely years. An altercation with her boss and the arrival of a mysterious stranger lead to shocking revelations about her past – and puts all those she loves in grave danger.