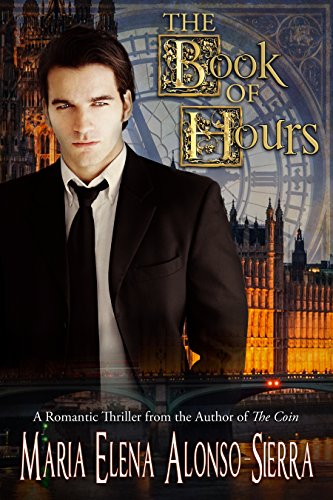 The Book Of Hours

For Gabriela Martinez, psychopaths do hit twice.
An unscrupulous arts dealer covets Gabriela’s work to the point of madness, Richard Harrison will do anything to get her back in his life, and if Richard and Gabriela don't stop this new threat, their future together could go up in flames.

For artist Gabriela Martinez, psychopaths do hit twice. What did she ever do to deserve this?
An unscrupulous arts dealer covets Gabriela's work to the point of madness, Richard Harrison is willing to do anything to get her back in his life, and if Richard and Gabriela don't stop this new threat, their chances for a future together will go up in flames.

A LOVE IN JEOPARDY
In 1993, artist Gabriela Martinez almost lost her life to a sociopath's twisted vision. If not for Richard Harrison, the operative sent to protect her, she would have ended up dead. The dramatic showdown pushed them together, but there were too many obstacles temporarily pulling them apart.

A NEW THREAT
After catching a glimpse of Gabriela's new work, The Book of Hours, Arnold Wickeham has been like a man possessed. Now, he will do anything—anything—in order to claim it, and nothing, especially not Gabriela, will stand in his way.

THE PAST IS CATCHING UP
Richard Harrison has never given up his true love, Gabriela. Now someone new is threatening her life, and he will risk everything to protect her. But the stakes are now higher, and there is much more to lose. And, if he doesn't stay one step ahead of the danger, her life, but especially, their future, may very well go up in flames.

Set in California and London, The Book of Hours, the follow-up to The Coin, is a story about greed, obsession, family duty, and, especially, deserved second chances.