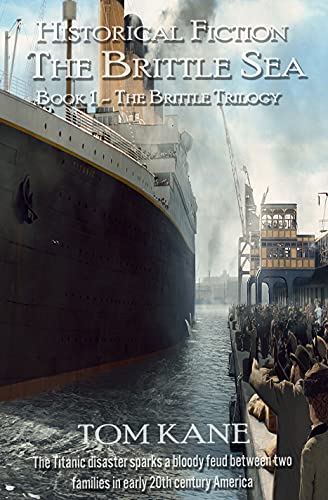 The Titanic disaster is the catalyst that sparks a bloody feud between two families in early 20th century America.

Set in the early 20th century, against the backdrop of the Titanic disaster, 'The Brittle Sea' is a captivating, inventive read, with dark & sinister characters and a gripping storyline.
Magda Asparov, a young woman from Ukraine, is bound to marry Matthew Turner, a shrewd and unscrupulous American businessman. But her journey to America is cut-short when the ship she is travelling on, the Titanic, hits an iceberg and sinks.
Magda loses her memory and a new personality, Maggie, takes hold. Richard Blackmore, Captain of her rescue ship, falls for her. What follows is the hunt for Magda by Turner's evil henchman, William Harker, who aims to succeed by any means, fair or foul.
The ensuing search leaves Richard Blackmore as collateral damage.