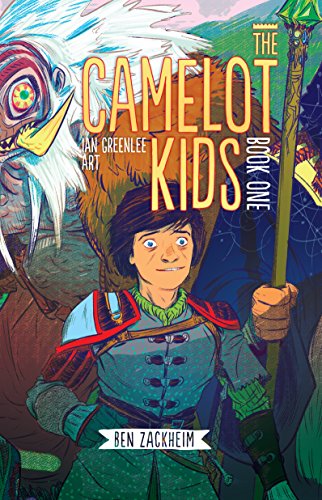 When Simon Sharp loses his family to a plane crash he's forced to live on the streets. But a mysterious girl informs him he's an heir to the great knight, Lancelot, and that he's in great danger. Simon is swept up in a quest to save a hidden kingdom along with 149 other descendants of King Arthur's Knights of the Round Table.

Simon Sharp lost his parents to a plane crash two years ago. Now, it's his fourteenth birthday and the only gift he wants is a place to belong. Unfortunately, he's made a lot of bad decisions since the accident. Running away from halfway houses. Lashing out at people who care about him. And, worst of all, doing small jobs for a petty thief. Every payday makes the memory of his parents fade a little more.

So when a girl in a colorful cloak shows up and tells Simon that he's in danger and that he's the heir to Lancelot, King Arthur's most powerful knight, Simon assumes it's a joke.

But a drunk troll, a 7 foot man who calls himself Merlin and a hidden castle called New Camelot change his mind.

Now, training as a knight with 149 other descendants of King Arthur's Knights of the Round Table, Simon finds himself part of a prophecy that promises the salvation of the world.

But only through its destruction.