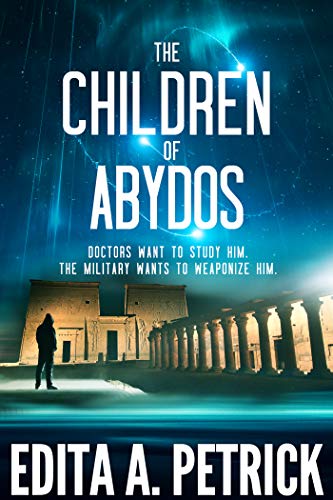 The Children Of Abydos

A promotion that’s not, a case that’s seemingly already solved, and a search for an immortality gene. It’s a deadly game - and it’s even deadlier when you don’t know who you’re playing against. And for what.

How is there evidence that the gas station clerk has been shot three times point blank and survived?

With an ambitious past now in ashes, Harmon is a twenty-year veteran of the Bureau. Blunt, with little patience for idiots and even less political savvy, he's just been transferred to a small resident agency in Santa Rosa. It's not exactly an outright dismissal but it's the opposite of a promotion.

Given a new partner - Kate, green and freshly graduated - and a routine investigation, it's not long before Harmon realizes that this case is far more than it seems. Why has he been given a case when the suspect is already in police custody? How can there be evidence that the gas station clerk was shot point-blank three times … and survived?

With far more questions than answers, Harmon and Kate are ferried from case to case as they realize that they've been tossed down an increasingly deadly rabbit hole - but by who? And why? And could a seemingly impossible tale of an immortal man be … plausible?

Deception lies at every corner; the stakes are mounting and with it—the feeling that they're expendable pawns in the hands of a hidden puppet master.

A case cloaked in mystery, explosive leads and a partner with a hidden past, Harmon will need his wits about him if he ever wants to make it through this investigation alive.

A riveting, fast-paced paranormal thriller - this novel will keep you at the very edge of your seat and turning each page until the very last.