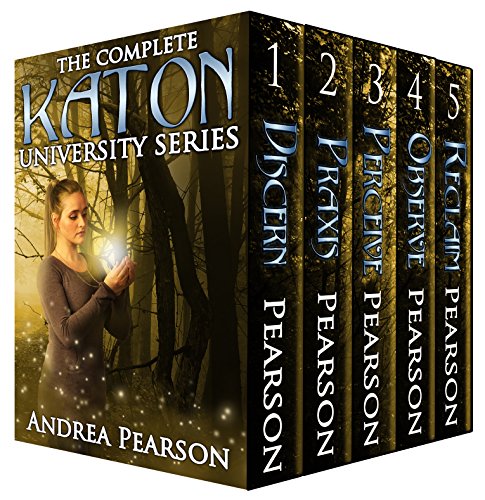 Nicole has been chosen to lead a corrupt, anti-magic organization in a revolution which will destroy all Aretes, including herself. But if she doesn't do it, a curse placed long ago will certainly lead to everyone's destruction.

This ebook contains all five books of the Katon University series. Here is the description for Discern:

Nicole Williams is an Arete—a fourth child with magical abilities—yet no matter how hard she tries, she can't Channel her power. In fact, she seems to be the only student at Katon University who fails at magic.

This doesn't stop her from competing to be included on a university-led expedition to Arches National Park. She is determined to show everyone, but mostly herself, that she does belong. Yet, to qualify for the trip, she must produce at least a speck of Wind magic, and that appears to be impossible.

Nicole turns to her best friend, Lizzie, for help, along with fellow student Austin Young, who is considered by all a magical rarity. He also happens to be the hottest guy on campus and just might be interested in her.

As the competition progresses, Nicole wonders if she's making the right choice—especially when she learns that the strange fossils they'll be studying in Arches might not be as dead as everyone thinks.