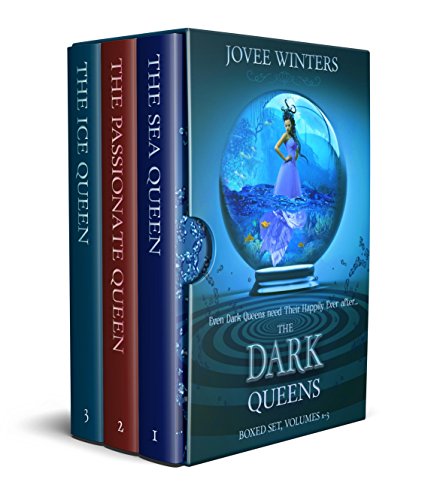 A collection of the first three Dark Queens books!
-The Sea Queen
-The Passionate Queen
-The Ice Queen

A collection of the first three Dark Queens books

-The Sea Queen
Calypso, Queen of the Seas, is mad. Spitting mad. Ghosts of the dead are fouling her waters. She wants this problem fixed, and she wants it fixed now. Rushing off in search of Hades, Lord of the Underworld, to demand answers, she's soon shocked to discover him bound and standing trial before a jury of his peers--for nothing less than murder.

Calypso normally despises the beastly gods, all of them, but there's something about seeing Hades bound as he is that gives her an evilly clever idea. Tired of being a virgin queen, she wishes to shed that boring image once and for all, and no one seems quite as fit for the task as the gorgeous and brooding Hades. Of course, there is the minor problem of murder to deal with, but Calypso is bound and determined to have her way.

And when a dark queen gets an idea, nothing and no one can stand in her way...

-The Passionate Queen
Once upon a time a dragon dared to fall in love with the Queen of Hearts...

Zelena Hermosa wants only one thing, to be free. But for a morphling like her freedom will never be possible. Bought by a witch as a baby, she's been raised in a household that knows no kindness or love. She's a broken, dirty child the day she meets her prickly little dragon boy.

Ragoth Nur, heir to the throne of Drakon has just stolen a golden apple from Zeus's favored orchard. In order to make sure he doesn't have to face the wrath of the gods (but especially his mom) he runs off to wonderland to enjoy his treat and there bumps into the human girl who will change the course of his life forever.

There's so much more to the Queen of Heart's than the stories. So much more than the vindictive woman who shouts, "Off with her heads." This is the true story of the woman, the legend, and the myth...

-The Ice Queen
Long ago, tragedy struck and turned a young woman into the ice queen of legend...

Evil has come to Luminesa's forest. The Goblin has stolen three innocents and thrust them into a violent and terrible time loop - in her own lands. And the only way to save them is to go to them herself. But there's a problem, because the moment Luminesa steps foot inside that magicked place she too will get sucked into the Goblin's nefarious scheme. Freedom can only be had if she can figure out the riddle of the key, and she only has one month to try. Failure means death for them all.

There is absolutely no time or room for romance, but that's exactly what happens when she first sets eyes on the centaur male, Alador. Luminesa's been burned in love before, nearly losing her life to the hands of a crazed male she'd once thought a friend. Since that night she's hated men, all men, no matter what form they come in. But Alador is different, kind, gentle...with soulful green eyes that seem to peer through the icy veil of her legend to see the real woman beneath. His touch makes her burn, and his kisses make her feel alive again.

Luminesa will do everything in her power, to make sure they all leave there alive. Even if that means killing anything that stands in her way...