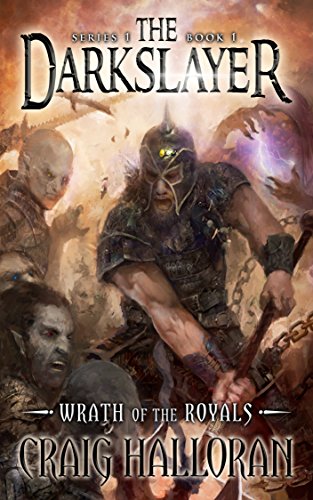 Darkslayer is an epic sword and sorcery adventure set in an ingeniously imagined world where bored immortals play with the lives and fates of the unsuspecting beings inhabiting it.

A world of corruption and carnage has an indomitable defender...

The all-powerful immortal being, Trinos, created the world of Bish for her own amusement. There an eternal war rages between good and evil under the gaze of the bored goddess. Humans battle monsters and each other in a savage, never-ending conflict--from the planet's lush and perilous jungles to the streets of its decaying cities, rife with horror, death, and corruption, to the desolate wastes of the Outlands. And there is one who is charged with maintaining the delicate balance between light and darkness: the warrior Venir, the Darkslayer.

Armed with the mantle of power, his helm, war axe, and his shield, Venir must defend what is good from those who would destroy it. Whether it's the monstrous underlings, emerging from below ground to wreak havoc and terror upon humanity, or the cruel and greedy Royals oppressing their own vulnerable race, no base, ruthless creature will escape his wrath. But now a sinister threat looms on the horizon that even the Darkslayer may be helpless too oppose. For a second immortal has entered the great game--and this new god will not rest until evil reigns supreme for all time.

On a volatile, savage world created by an entertainment-seeking goddess, the warrior known as the Darkslayer is the champion of good, battling monsters and men to maintain a fragile balance and prevent the world from descending into total chaos and desolation.