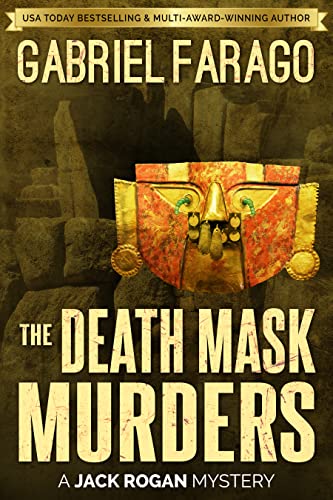 Seven brutal murders. A cursed Inca burial mask. A lost treasure. One deadly game.
When convicted killer, Maurice Landru reaches out from a Paris prison and asks for help to prove his innocence, Jack Rogan decides to investigate.
Drawn into a web of hidden clues pointing to horrific murders and an ancient treasure, Jack enters a dangerous world that threatens to destroy him.
Will he succeed, or will he lose everything he holds dear?

Drawn into a web of hidden clues pointing to an ancient mystery, celebrated author Jack Rogan decides to investigate.
When convicted killer Maurice Landru reaches out from a Paris prison and asks for help to prove his innocence, Jack cannot resist. Joining forces with Francesca Bartolli, a glamorous criminal profiler, Mademoiselle Darrieux, an eccentric Paris socialite, and Claude Dupree, a retired French police officer, Jack enters a dangerous world of depraved cyber-gambling where the stakes are high, and the players will stop at nothing to satisfy their dark desires.

Following his ‘breadcrumbs of destiny’, Jack soon comes up against an evil genius who terminates his enemies without mercy and is prepared to risk all to win.

On a perilous journey littered with violence and death, Jack uncovers dark secrets of a murky past of ruthless conquistadors, bloodthirsty pirates and shipwrecked priests, all pointing to a fabulous Inca treasure, waiting to be discovered.

Can Jack expose the mastermind behind the horrific murders and retrieve the legendary burial mask before it falls into the wrong hands, or will the forces of darkness overwhelm him and destroy everything he believes in?