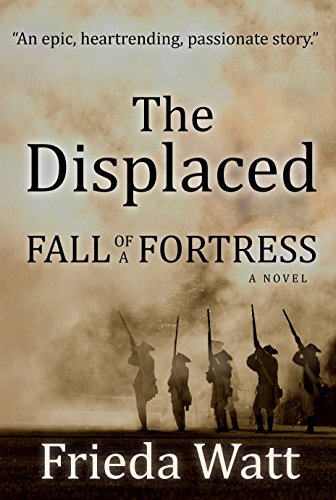 The Displaced: Fall Of A Fortress

A gripping tale of love and survival, not for those who need to work the next day. Enter the Fortress of Louisbourg in 18th century colonial New France. Lovers torn apart by war. Can they survive all that the British throw at them? Most reviewers describe this book as a real page-turner with vivid descriptions of characters and setting.

Stranded in a besieged fortress, can a strong refugee woman survive and fight for her true love? Canadian Author Frieda Watt transports us into the barbaric world of 18th century colonial America where treachory, murder, and rival armies fight violent turf wars in Volume One of her epic new series, The Displaced: Fall of a Fortress.

In 1744, the mortar in the walls of Louisbourg fortress is still wet as Britain advances to conquer this new French city, its citizens both protected and imprisoned by its massive stone ramparts.

Torn between clashing empires and contentious families, Marie Lévesque fights to find a place in the unforgiving frontier of Canada. As a young woman, her life is just beginning. Her friendship with Pierre promises of something more. But their lives and the doomed fortress of Louisbourg are caught in the cross-hairs of the British navy, who promise to annihilate not only them but also their very way of life.

As empires collide, Marie and Pierre are catapulted into a world they do not understand—a world of spies, treason, and revenge. They must fight not only to survive the war, but also to stay together despite the forces that threaten to tear them apart forever.

This beautifully written, epic work of historical literary fiction, with the same feel as Outlander, is a must-read for any lover of historical fiction. The Displaced: Fall of a Fortress tells the story of ordinary people as they try to survive as French rule crumbles in Canada.